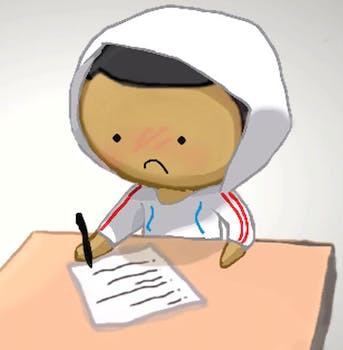 SWooZie, the storyteller behind "Confessions of a Disney Employee," is back with a tale of cheating in middle school. Plus: Mark Malkoff continues his quest to get Bill Murray on his show.

Esteemed storyteller Adande “sWooZie” Thorn recounts the first time he got caught cheating in middle school. Are you at all surprised it happened in French class? French class was basically impossible!

It’s been 29 days since comedian Mark Malkoff began his quest to bring Bill Murray to his apartment in Queens, but the YouTube wild man has not yet given up his fight. This week, Malkoff brought longtime friend Marc Berman to the show. The reason: he used to park Bill Murray’s car.

Secrets revealed through tapping the security cameras at Jennifer Aniston’s L.A. home: she’s pregnant with triplets, has a 44-year-old son named Jimmy Kimmel, and might have access to an alien. It’s a weird world out there, and looks can be deceiving.

Need some help handling your dirty work? Brittani Louise Taylor may have found the trick. Introducing the newest line of teenaged hit men: the Killer Kids. All you’ve got to do is call 1-800-D-E-A-D-M-E-A-T. Naturally, the clip comes with a necessary PSA.

Down home chef du YouTube Hilah Johnson has a new channel, Hilah Talking, one that’ll find her answering fan-submitted recipe and cooking questions as well as jibber-jabbering on whatever else the affable Johnson wants to discuss.