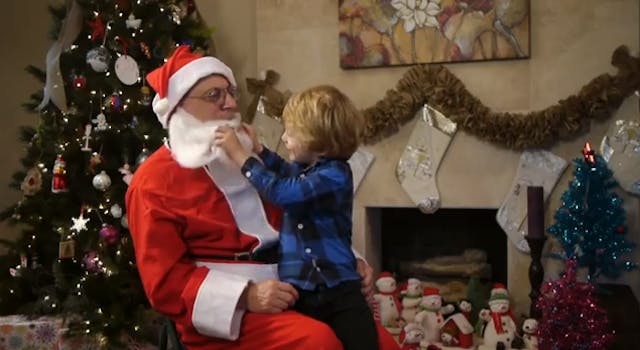 Did Rhett and Link get Santa to visit their kids? NOPE! It's Chuck Testa!

Rhett and Link bring in viral taxidermist Chuck Testa to play Santa Claus for their children. The kids give him their Christmas lists, and while some of them want a dog, they might not be Testa’s future customers.

Santa Claus has a big announcement this year—and you better respect. Sean Chapin, who was behind the San Francisco 49ers “It Gets Better” video, took the reigns with Santa’s coming-out tune. But this doesn’t change anything. Santa will still know if you’ve been bad or good.

Another “Gangnam Style” parody? Unlike many of the versions we’ve seen, the latest one, created by the NASA Johnson Space Center, is educational, with re-imagined lyrics filled with information about what’s happening at NASA.

Santa donned a beer before it became mainstream. The hipster curmudgeon yearns for simpler times before Christmas became a commercial holiday and parents spent all their money on presents. And don’t be naughty unless you want a Nickelback CD.

5) Nerdist, “To Catch a Puppeteer”

Neil Patrick Harris’s puppet dreams often reflect real life, and after conking out in the middle of To Catch a Predator, NPH finds himself being questioned by a felt Chris Hansen as the worst kind of person: a puppeteer.