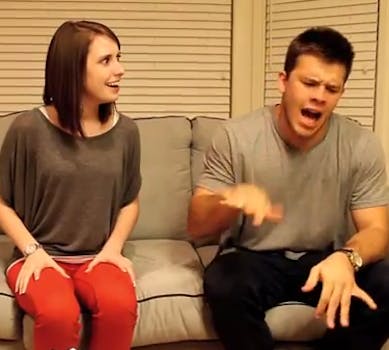 Breaking up is hard to do and harder still when your girlfriend is practically joined at the hip.

1) Life According to Jimmy, “Breaking Up with Overly Attached Girlfriend”

Jimmy Traino tries his best to break things off with a girl he met earlier in the week. The only problem: Traino’s girlfriend is famous… for being an overly attached girlfriend. Remember Laina? She’s back, and she’s just as overly attached.

Since February, the Screen Junkies’ Honest Trailers have been the single most determining analysis on whether or not we’ll go ahead and Netflix a movie. In the case of The Avengers, the conclusion is clear: We’re dying to catch “the movie blockbuster that finally unites the world’s greatest superheroes—that Marvel still has the rights to.”

Portlandia star Fred Armisen steps inside Mike O’Brien’s closet to talk about the show, try a few unverified impressions, and make some percussive closet music. There’s also some kissing at the end. The whole thing’s actually kind of awkward.

5) Gringotone, “I Am Flip Phone Trailer”

Imagine a world in which one man has chosen to go through life in 2012 with nothing but a flip phone and some golf clubs. Andrew Nackrude is a dude with a flip phone living in Las Angeles, and he hasn’t had a conversation with anyone in more than three weeks.