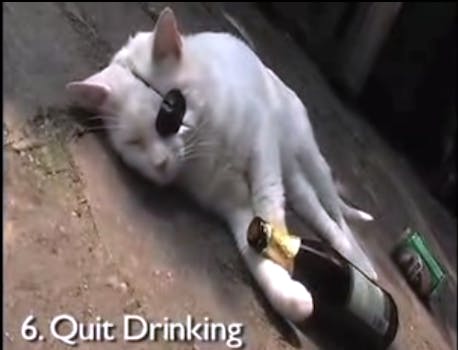 At the beginning of every year we always have our list of resolutions we want to accomplish (but rarely keep), but now that we have visuals of our goals with cats, it might make things easier for 2013.

2) Walk off the Earth, “I Knew You Were Trouble Feat. KRNFX”

The band Walk off the Earth has already had success with their previous covers (including a collaboration with Julia Nunes), and now they’re back with an a capella cover of Taylor Swift’s insanely popular hit with a little help from Canadian beatbox champion KRNFX.

YouTube rapper DeStorm Power tidied up the past year’s major events in one “rap-up” video as he tackles everything from celebrity deaths, successes, shakeups and tragedies, pointing out that the Mayans were wrong and through it all “we’re still here.”

We’re still in the middle of the NHL lockout, and it’s even more noticeable with the lack of a Winter Classic, but hockey fans everywhere are still going strong as the NOC portrays each team’s stereotypical fan.