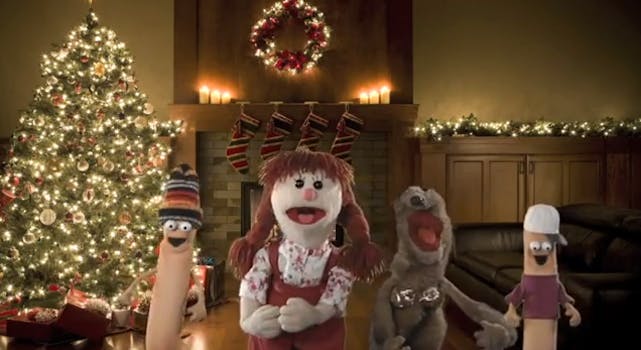 Got your five inappropriate thoughts in mind? Jim Henson’s Miskreant Puppets bring us their version of the “12 Days of Christmas,” and it’s as much a pain to get through all of the gifts as the original—although these presents are more entertaining.

We thought the Mayans predicted the end of the world on Dec. 21 and while that isn’t the case, we just missed the bigger picture: the calendar is part of a cat that possesses supernatural power and just took over the Nyan Cat. Simple mistake, really.

3) TheTrailerCats, “Dogs and Cats Living Together”

Dan Aykroyd, Harold Ramis and Bill Murray paint a picture of what the end of the world will be like like in Ghostbusters, but imagining the last one—”dogs and cats, living together, mass hysteria”—yields some adorable results.

The 50 biggest viral videos of 2012 are rounded up in one video, including a bad lip dub, the Rebecca Black of holidays, a songified debate and biggest viral hit of the year playing in the background to ruin it all.

Henri can’t stand the holidays, but soon he is visited by the Cats of Christmas Past, Present and Future in a Christmas Carol homage that leads him to realize that a philosopher life will leave him friendless and he should appreciate that he is alive and not a dog.