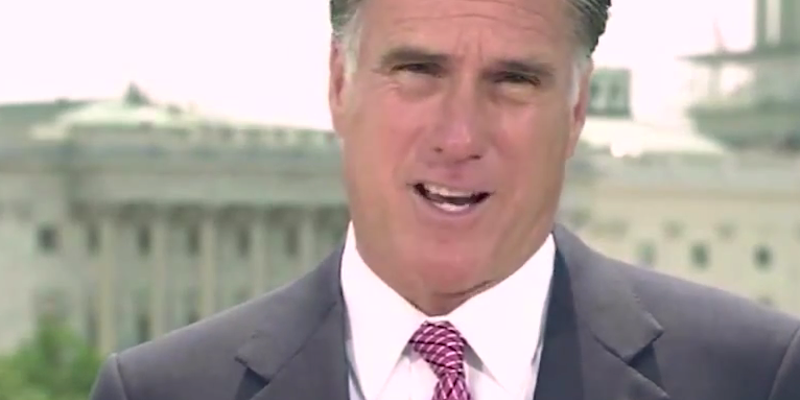 Bad Lip Reading is back with another video putting words in the mouth of the Republican presidential candidate. Plus: Symphony of Science remixes Julia Child.

The anonymous genius behind Bad Lip Reading has amassed 224,000 subscribers and 44 million views since he first started twisting public figures’ words last March. His first Mitt Romney soundbite racked up 2,724,000 views. His new one, dubbed “More Mitt,” is just as outlandish as the first. “Come on, people. I mean, I know it feels good, but we’re embarrassed.”

3) Skyler Stone, “Chicken, with a side of hate”

Comedians Skyler Stone and Mike Smith—heterosexual males “most of the time”—are so heated about Chick-fil-A CEO Dan Cathy’s statements about gay marriage that they’ve decided to make out with each other in protest. To do so, they loaded up on breath mints and call Stone’s fiancée. Then they solicit a homosexual couple for tips. And then, with a supportive audience watching, they fall into each other’s arms, fall into each other’s lips, and make the decision to stand for something.

Leave it to Ze Frank to boil down the politics behind job interviews to their most basic components: stressful, chaotic, and entirely one-sided. Well, the bad ones are, at least. Thanks to a tip from a show fan SamKid1, Frank gives the perfect prescription for how to interview with a potential employer “on a human level.”

Celebrated Atlanta rapper 2 Chainz has a new album out, this week’s Based on T.R.U. Story, and everybody’s talking about him. If you know anything, that means it’s time for eccentric, extremely unusual interviewer extraordinaire Nardwuar—recently strapped for production on Pharrell Williams’ I Am Other channel—to step in and geek out with a microphone. You wouldn’t believe some of the artifacts Nardwuar pulls out of the crate—unless you know the first thing about Nardwuar. Then you know this unusual showering of gifts is nothing at all out of the ordinary.