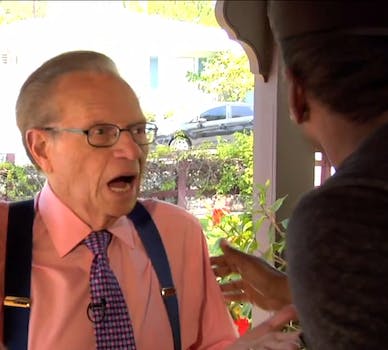 It’s simply not too often that you get to tune in to your favorite rap show to find media icon Larry King shouting “What’s up, world?” into the hook of a dirty hip-hop beat. But that’s the power of DeStorm Power: the YouTube sensation is not afraid to mix it up with aging, suspender-clad TV hosts. King dropped into Power’s crib to solicit the rapper’s help in putting together the theme song for his new Hulu show “Larry King Now.”

Boston-based electro pop group Passion Pit has a new album out, July’s Gossamer, and by all accounts, they’re ready to take over the world. Capitalizing on this, or perhaps showing proper respect, is YouTube a cappella wiz AaronicStuff, who drops a nine-part a cappella take on the triumphant single.

Minor League baseball: the only place where a public address announcer can get ejected for the music he plays. Upset over the strike zone of home plate umpire Mario Seneca at the Daytona Cubs game, public address announcer Derek Dye decided to run a few bars of “Three Blind Mice.” But Seneca didn’t like it, and he ejected Dye, an intern, for the decision. USA Today reported that a fan in the stands handled batter announcements for the rest of the game.

4) The Thrash Lab, “Batman Movies Through the Ages”

Batman’s all the rage right now, but do kids out there even know the history behind the mask? Thanks to Guy Branum and the Thrash Lab, YouTube now has this four-minute lesson on the rapid ascent of Gotham’s cinematic Dark Knight, from Tim Burton’s original through the morose George Clooney years, all the way up through Christian Bale’s revival of the character. Crazy to see just how far it’s come.

Welp, real live puppets are going to high school now, and their lives are just as tough as the nerds they go to class amongst. In the second episode of the new Above Average Network series, Matt Summers (played by Andrew Friedman) has to decide whether or not he’s got the guts to try out for the basketball team. The only problem: Matt’s just about the size of the ball.