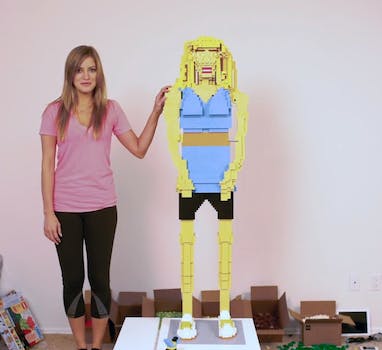 Forget about the boob tube. The real action is on YouTube, the video-sharing platform that’s redefining what it means to tune in to the 21st century. The Google-owned company, now caters to over 800 million unique visitors who watch more than three billion hours of videos every month.

That’s a lot to wrap your head around— especially when you consider all the content creators putting up new show material every day. If you tried to watch it all… well, maybe it’s best that you don’t think about trying to watch it all.

Here’s where The Daily Dot can help. Every afternoon, we’ll scope out the wild array of content that goes up onto YouTube and handicap our favorites into a convenient digest, one that should make your after-work viewing far more enjoyable than channel surfing.

Think of it like that copy of TV Guide on your grandma’s armchair, except updated for a new generation.

Justine finds a group of friends who will help her create a life-size LEGO version of her own figure, starting with the shoes and going all the way up to the hair. It’s a pretty wild sight when, after three minutes of stop-motion shots, the final figure is cast and Justine’s standing there with it.

Judging by shots of her friends sleeping on couches and the changing sunlight that shoots through the window panes, creating this LEGO took at least a day to make.

Rapper Destorm rolls on with his educational focus by flipping a three-and-a-half minute how-to guide on what it takes to dominate a game of Monopoly. “You wanna win in this game, you better settle your past debts,” he raps. “Your ultimate goal is to have the most money and assets.”

Worth scoping just so that you can watch Destorm make it rain fake cash in his mother’s kitchen.

3) The Lizzie Bennet Diaries, “Episode 21: The Semester is Over”

The much-adored twentysomething dishes on what she’s going to do with her summer now that school’s over and she’s handed in her practicum for her social media seminar. Bennet and her old chum Charlotte sort out a few plans for their VidCon adventures next weekend before musing for a spell about just how similar job hunting is to finding a boyfriend.

“In the 20 seconds it takes for me to walk in and say ‘Hi, my name is Lizzie Bennet,’ they have already decided if they’re going to hire me or not,” she says. “It’s the most high pressure first impression ever.”

Saturday Night Live writer Paula Pell drops by John Lutz’s front desk to complain about the turn down service, which she thinks is responsible for the heaping pile of poop in her loafer shoe. It only takes a few minutes before the conversation dissolves into a diatribe on her dog Tabitha’s fabulous sexual orientation.

Love Chick-Fil-A’s chicken sandwiches but can’t stand the anti-gay message the Southern-fried fast-food chain represents? Lovable indie chef Hilah Johnson is here to show you how to take matters into your own hands. In this six-minute tutorial, Johnson coaches viewers through the process of making Chick-Fil-Gay (“Because they’ll make ya happy!) sandwiches, from the chicken-pounding process to the pickle marinade and through the grease-pooling process.