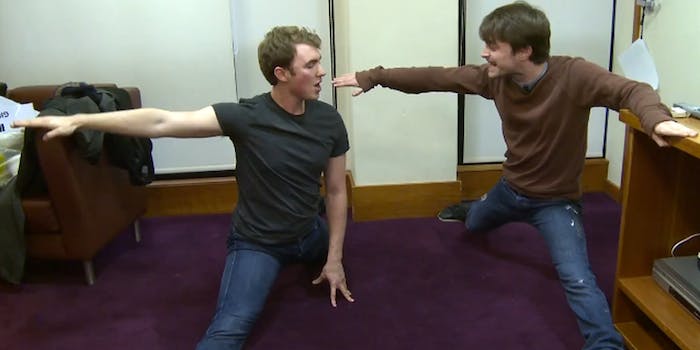 Being the Harry Potter star is tougher than it looks.

Actor Daniel Radcliffe tells us just what we need to do in order to be a successful actor. And while he hired Jake to keep him grounded, he’s intimidated by him, leading to an outburst of anger. You’d be a little nuts, too, if you played Harry Potter on film for a decade. At least Radcliffe has his appreciative fans, even if he can’t do a handstand or split.

Grand Central Terminal in New York City just turned 100 a few days ago, so Improv Everywhere recruited 135 participants to create a light show on the terminal’s west side with LED lights and cameras, to the enjoyment of the commuters and tourists below.

Journey’s Steve Perry has recently discovered the Internet and all its high (and low) lights, but he especially has a knack for memes. His love for them is enough to change the lyrics of “Faithfully” to profess his love in song.

Mario and Luigi have handled their fair share of ghosts, so it’s only natural that they take their services to the rest of the Mushroom Kingdom. Peach is possessed, Yoshi imagines the Stay Puft Marshmallow Kirby, and Luigi is left to save the day in a mashup with Ghostbusters.

Paul and Storm are trying to go viral in the latest episode of LearningTown, and they enlist the help of Weird Al Yankovic, gym sequences, jean jackets, and an ’80s-era training montage.