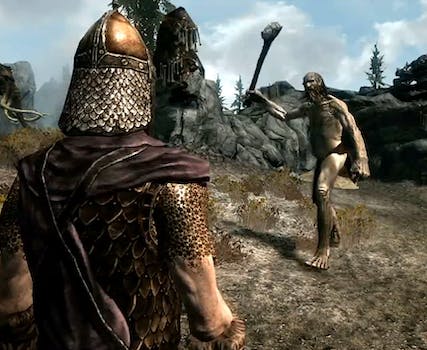 Whatcha gonna do when the town guards come for you? Plus, Ryan Higa discovers the best joke ever.

Bryan Basham and the geeks at Nerdist have put a new slant on an old staple—mixing the magic of Fox Television’s classic Cops with the smash-hit RPG The Elder Scrolls V: Skyrim. The result: wizards facing accosting, drunk cobblers “shooting flames of fire,” and high-speed horse chases.

The best joke ever? Turns out it’s just a “knock-knock” joke—about walking into a bar. Isn’t that punny? Ah, forget it. Let’s just cut to the chase.

It doesn’t matter whether it’s Stewie Griffin, Walter Cronkite, or Elmo: There’s simply no voice that the Texas-based Chris Griesemer can’t remake to be bigger, bolder, or funnier. Best is when Griesemer breaks into “the dialect portion” of the clip and sorts through the different intonations between southerners and Brits.

The Trash Lab crew heads out to beautiful El Dorado Park, Calif., to get a look at some of the more than 50,000 American Civil War reenactors who put themselves on the front lines of antiquity every year.

Is it possible to have yourself a nice, cordial, and mature box wine garden party? Try all you want—don the white linens and baguettes and croquette. After three rounds, that baguette’s going to be between your legs, and you’ll be playing Slap the Bag.