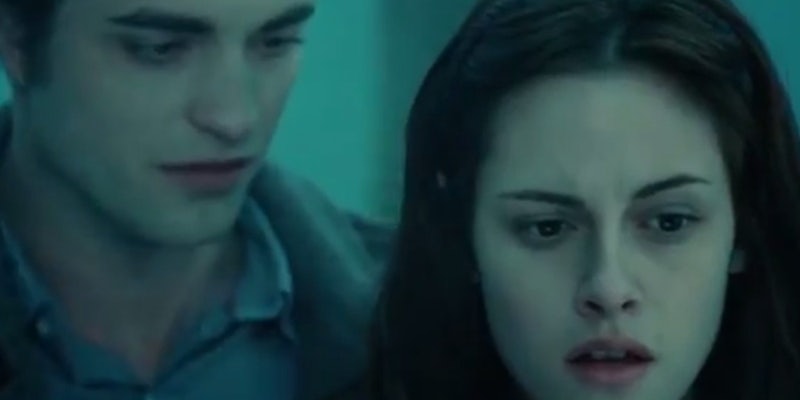 Bad Lip Reading takes on Twilight. Plus: Famous socks Sifl and Olly are back ... on the Web!

The best worst lip reader in town is back, this time taking on the trials of Twilight‘s Edward and Bella in this three minute discourse on “Bella’s brother Kevin,” “what the two had for dinner,” and “the smell of a girl’s tongue.”

“I find video clips and don’t listen to the sound,” the anonymous creator behind Bad Lip Reading explained to the Daily Dot. “As I do it, I realize that there are moments when I’m realizing these phrases for the first time. It’s not like I sit down and say, ‘I want this line to be this.’ My brain just realizes that it looks like the person said something.”

“We can talk about all the cool games, do interviews, calls, and the best part is that we can put it on the Internet,” Olly explained. “So there are no rules. No TV execs breathing down our asses this whole time. We can do whatever we want.”

Tune in for more, plus a pretty fun Olly-penned song about pie.

“Big thanks to Daym for featuring my video and my channel,” LessThanPi wrote in the video’s comments. “I can assure you there will be many more great speed paints and arts to come. Work hard, put your all into it, and very rarely will you not be rewarded for it.”

The funniest show on Above Average Network rolls on with this hilarious detail of the shoddy cell phone service one gets in a New York City apartment. Or maybe, you know, Bernice just hasn’t received any calls in a while. “Always wait three rings, so they know you’re important,” Bernice says. You’ve got it.

Filmmaker Deidre Schoo’s “Bklyn Flex” series takes a look at 21-year-old Sam I Am, a mime trainee who has his heart set on becoming one of the best flex dancers in the city.

“I want to get out of my comfort zone and be somewhere where I’m nervous and don’t know what to do,” he said. “Five years from now, I see myself performing at the MGM Grand, like a big Vegas show.”