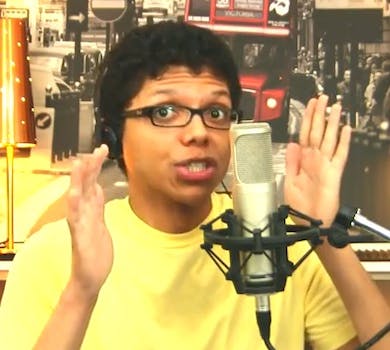 Jimmy Fallon and company notwithstanding, we’ve had more than enough covers of Carly Rae Jepsen’s number-one hit “Call Me Maybe.”

The Internet refuses to let go of a good thing though, and when one meme crashes headlong into another, magic can occur. Following in the footsteps of fellow Web icon Ted Williams, Tay Zonday has taken a stab at covering the ubiquitous ditty.

Zonday, you may remember, was the deep-voiced fellow behind YouTube hit “Chocolate Rain,” which propelled him to fame and a South Park appearance.

In the intro to his “Call Me Maybe” cover video, Zonday says, “I sang this as low as I could, just for fun.” Zonday’s low register contrasts markedly with the sugary pop vibe of Jepsen’s original rendition. It’s somehow creepy and remarkably entertaining at the same time.

As great as it is, we’re still waiting for Zonday’s take on “Somebody That I Used To Know.”

Oh, wait, he did that too. In Broadway style. Brilliant.