Finally, the science behind our collective hatred of those pesky YouTube pop-ups.

Recently, I was watching DJ Snake & Lil Jon’s video “Turn Down for What.” The video itself was epic. However, I grew more and more irritated while I watched. The incessant begging for clicks from Vevo’s non-stop annotations, which had nothing to do with the video, grew tiresome.

Pictured here in the lower left hand corner is the third “InVideo Programming” annotation (the buttons that display during a video promoting another video or channel per the creator’s selection) that popped up, only two minutes into the video: 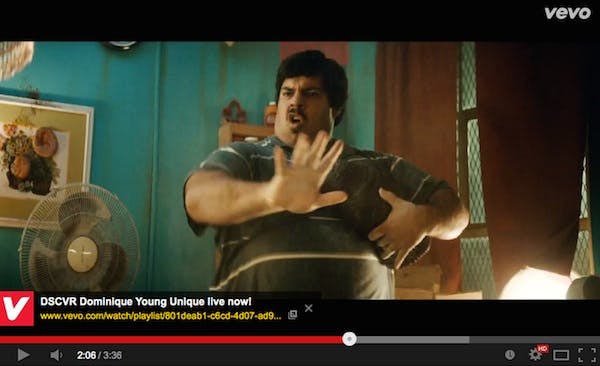 This experience made me think about how we use annotations on Cartoon Hangover, the channel where my team and I distribute shows such as Bravest Warriors and Bee & PuppyCat. I came to the conclusion that we needed to scale back our use of InVideo Programming and other types of YouTube annotations.

As channel managers, we are programmers. Not programmers in the coding or tech sense of the word, but programmers as the word is traditionally known in the film, television, and radio industries. We have to decide what, when, how, and where our videos appear. Our end goal – our main task – is to provide a great experience for viewers, allowing them to enjoy the content they want to enjoy.

And part of that experience is the packing in which our videos are delivered – the bumpers, endplates, annotations, and InVideo programming.

Using this reasoning, reducing our use of annotations makes sense. Get out of the viewers way and let them enjoy the content. If we have to distract them with shiny objects and annotations midway through our content in order to get them to watch more of it, we need to make better content, not make more or better annotations.

Not All Annotations Are Created Equal

This logic needed to be backed up by data, so my team and I looked at our analytics and were not surprised by what we found. The first thing we discovered was annotations that appeared during the actual video itself, the content, had an abysmal click-through-rate of below 1%, with very high close rates:

Often times the annotations even had click-through-rates of 0%!

However, the analytics weren’t all bad news. The annotations in our end cards (a piece of video we add to the end of a film that provides “calls to action” and directs viewers to new episodes and entices them to subscribe) had great click-through rates:

Less Can Be More

Our research led us to make the decision to remove all of the annotations that occur within the actual videos we distribute. We pulled all the annotations on April 10 and turned off InVideo Programming completely. The results were pretty drastic and noticeable almost immediately:

The table above shows the percentage increase or decrease in click-through rate (blue line) versus close rate (orange line) for all of the episodes on Cartoon Hangover against their respective rates from March 28th. What this means is that not only did our close rate plummet, our overall click-through rate skyrocketed.

We noticed a positive impact on individual annotations appearing in our end cards as well:

Obviously there are plenty of exceptions. For example, if a person is speaking to the camera and tells the audience to check something out then it makes sense to add an annotation during the video. But for the sake of your audience and your channel, take a look at your annotations and determine whether they are helping or hurting your audience and by extension your cause.

Matt Gielen is the Director of Programming and Audience Development at Frederator. Matt leads the programming team building Cartoon Hangover (currently at more than 1.3 million subscribers, 100 million views) and The Channel Frederator Network (with more than 300+ partner channels, 7.5 million subscribers, 1 billion+ views). You can follow Matt on twitter @mattgielen.