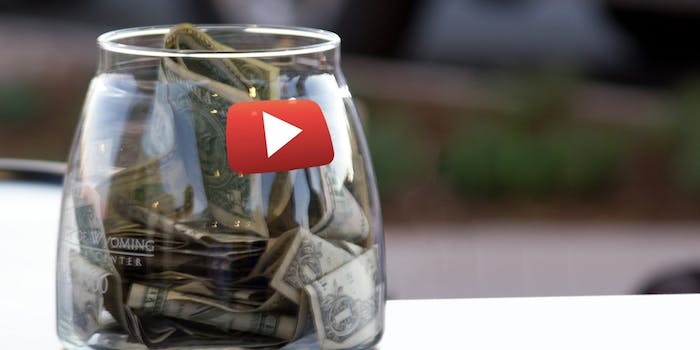 For just $10 a day, you can sponsor this poor, starving content creator.

Virtual “tip jars” used to be a hallmark of the seedy and debaucherous side of the Web. Viewers would tip performers with tokens or coins in exchange for the execution of escalating levels of debauchery. But now, thanks to YouTube, virtual tip jars are going mainstream.

Speaking in a VidCon keynote Thursday, YouTube CEO Susan Wojcicki announced a number of new intiatives that the video giant would be rolling out in the coming months. Among them were fan-submitted subtitles and translations, which will undoubtedly draw out the bilingual trolls; the ability to add clips with a higher frame rate of 48 and 60fps, which should especially improve video game coverage; an upgrade for annotations and infocards, where creators can post links to crowdfunding campaigns and more; and a new YouTube space slated for New York City.

But perhaps the most intriguing concept take a page from Subbable: the introduction of a tip jar that will allow viewers to “show a creator their love” to the tune of up to $500.

Given the history of online tipping systems, perhaps “showing love” wasn’t the right phrasing, but you get the point. Expect the usual grating YouTuber sign off of “comment, like, share, and subscribe” to become 10 times more agressive with pleas for tips for coins in the coffer. Let the begging begin!

Photo via learningdslrvideo.com (CC BY 2.0) | remix by Jason Reed