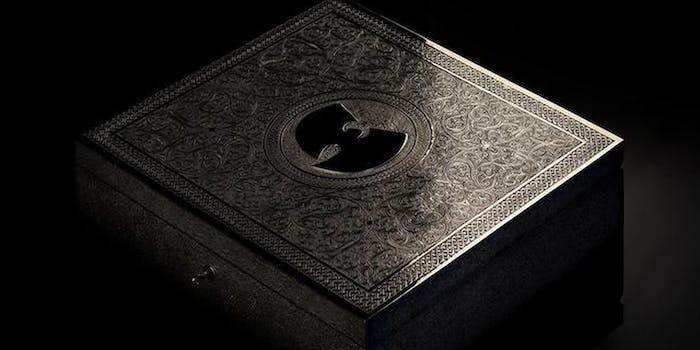 "I will happily destroy this album in public spectacle and never listen to it."

Wu-Tang Clan’s “secret” (but really, not-so-secret) upcoming album, Once Upon a Time in Shaolin, is being promoted as a museum piece, a one-of-a-kind work of art that currently has a price tag of $5 million. Understandably, this stunt has angered many longtime fans. There are those who want to tear down this proposed piece of fine art.

Last month, Wu-Tang Clan fans rallied on Kickstarter in hopes of raising enough money to purchase the album and then distribute it to fans. Now, one Virginia man is attempting to raise enough money to destroy it.

Chris Everhart channeled his frustration over the group’s high-falutin’ approach to the album:

“I hate that the WU has devolved into such self-riotous assholes. This would be a tremendous idea if all the proceeds went to poor artists or cancer research or Autism or something. Instead it goes to the pockets of artists who have the entire world at their ear. Music and visual art are art. Art should be shared with the world. Especially to poor people and the culturally disadvantaged.  I don’t see how this project isn’t mutually inclusive to denying that this work is art and should therefore be destroyed.

I will happily destroy this album in public spectacle and never listen to it. I have listened to this group since I was able to pick an album from the CD rack. But these m&%f$#s done went to far.

There will be a destruction ceremony that will be broadcast live via the intertubes. This ceremony will serve as a work of performance art. It will be scripted, filmed for posterity, and made available for download worldwide.”

Countering a performance with a performance is one way to interact with an album that’s been promoted as spectacle, as lore, as mythmaker. What value should we assign to a feat of marketing? Should Wu-Tang Clan be applauded for revising the blueprint for an album release, in a time when permanence is fleeting? The group and the album’s producer have been fairly quiet leading up to the release, but does Wu-Tang Clan feel they’re shutting out true fans, as Everhart implies? Have they been trolling us all?

There’s something kind of poetic in this crowdfunded cycle of creation and destruction, but Everhart goes on to say he does “not wish to personally profit in any way. I wish to obtain this album and destroy it in an artistic and grandiose manner.”

If you want to help him reach his lofty goal, you’ve got until July 28. His goal is $6 million, but he’s currently hovering around $50.