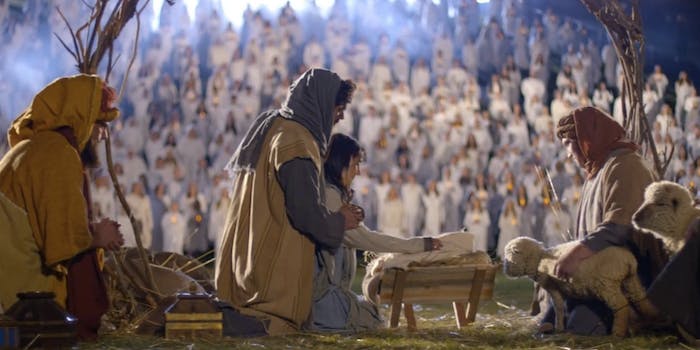 Thousands come together on YouTube for record-breaking nativity scene

Watch this for instant holiday spirit.

While others might be donning Santa hats and elf ears in their videos to celebrate the season, approximately 30 different YouTubers created the largest living nativity scene in the world, in partnership with the multi-faith Radiant Foundation, and broke a Guinness World Record in the process.

The event took place is Provo, Utah, and was lead by a cappella darling Peter Hollens, former American Idol runner-up David Archuletta, and The Piano Guys. They also involved the Mormon Tabernacle Choir to help create the lush sounds and massive scope of their nativity, which was set to a mashup of hymns “Angels We Have Heard on High” and “Angels from the Realms of Glory.”

In less than a day the feel-good video has clocked almost half a million views, especially thanks to the participation of other high profile YouTubers like ShayCarl and his family, Working with Lemons, and Devinsupertramp.