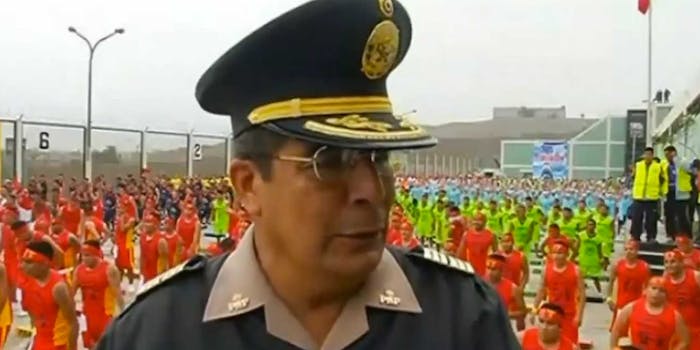 At least 1,200 prisoners in Peru's Lurigancho banded together to dance their way to the record books.

Move over, Cebu. There’s a new warden of the dance in prison.

At least 1,200 prisoners in Peru’s Lurigancho, a high-security prison located on the outskirts of Lima, banded together to beat the world record for the most inmates dancing together in one place.

The men from Peru, Venezuela, Ecuador, and Colombia practiced for over three months to get the aerobic moves just right before attempting the feat.

Donning multi-colored uniforms, the prisoners were given small wooden platforms and were coached by Roger Romero.

“The objective on June 14 is to set a new Guinness Record and show the world that it’s possible to change: that although they have lost their freedom, they have not lost their right to life,” said Col. Tomas Garay.

Dancing has become a programmed fitness activity in Cebu, where the Filipino prisoners who set the previous record while dancing to “Thriller” reside. It’s supposed to increase camaraderie and discipline. The prisoners’ stories have even inspired a webseries and an upcoming film,

It’s already having an effect on the prisoners at Lurigancho.

“There has been a radical change in the prison and this is because of the world of the colonel, the world of Alejandro Nunez del Arco, the work of all the guys who have been here,” said Miguel Angel Suarez, one of the prisoners who participated in the dance.

According to ITN, Guinness is still trying to confirm that the prisoners set a new world record.