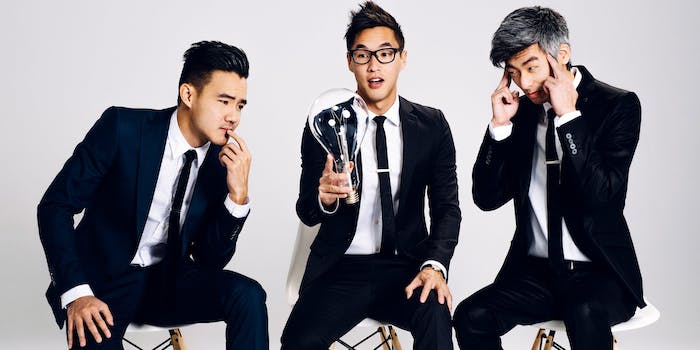 Wong Fu and the secrets of DIY YouTube stardom

Surrounded by plush stuffed turtles and penguins, Wesley Chan and Phil Wang nestle in among the computer screens and game consoles that decorate the large two room Wong Fu office. They’re going to move offices soon, but their efforts to pack have been delayed, leaving piles of puppets, merchandise, and fan made art lining the hallway floors and offices.

The group is made up of three members—Ted Fu, 32; Wesley Chan, 29; and Phil Wang, 29—who have been making videos together for over a decade.

With Fu running the group’s website and Wang and Chan taking the lead on creative projects in Los Angeles, the three have turned their YouTube channel into an indie media empire with over 2 million YouTube subscribers tuning in weekly to watch their skits and short films, which range in genre from comedy and drama to personal vlogs. They’ve spoken at over 130 universities and even met with President Obama through the Asian Pacific Islander coalition

You might have even see their popular video “The Last,” featuring Harry Shum Jr. and Kina Grannis. It gained over 7 million views and inspired numerous YouTube parodies.

The appeal of Wong Fu breaks down like a Venn diagram: Wang, the talkative, personable one; Chan, the mysterious one full of wanderlust and an affinity for triathlons; and Fu, the quiet one with a much beloved head of gray hair.

Together, they made the blueprint for DIY success on YouTube, carving a path for countless others to follow.

Wong Fu Productions was founded in 2003, after the three met in a digital arts class at University of California, San Diego. They hosted their early videos by buying bandwidth for a WongFuProductions website—a setup that’s difficult to fathom now in the YouTube era.

The trio eventually took on the name Wong Fu Productions (a title already established by Phil from a previous group) and began uploading their short films and skits onto their website.

“We bought bandwidth on a server and people would have to right click and download directly from us,” Wang recalled.

Wong Fu migrated to YouTube in 2007 and have since loaded its channel with nearly 400 videos ranging from skits, music videos, short films and the occasional webseries. The group has even been approached to make content for major brands, including Subaru and AT&T.

“None of us ever wanted to be actors or performers,” Wang said. “I think most YouTubers, they wanted to be in front of camera; they had a personality that they wanted to share. We were always just kind of behind. For us, it was more of a surprise; we’re just being ourselves and people are enjoying that.

“I’m constantly confused why people find us interesting. We’re not so reliant on personalities. We’d rather let the work speak for itself.”

It doesn’t take long to see why the trio’s work has become beloved by fans worldwide. There’s a sincerity at work that’s charming without being coy.

“People feel like when they’re watching us, they’re just watching a friend,” Wang said. “The fact that we’re a group that has been able to stay together is testament to that. We always say, we never let egos get in the way.”

Wong Fu’s channel has been credited with giving the Asian-American community the space to be creative away from the stereotypes imposed by traditional media. Their videos often include guests like Chris Dinh, Ryan Higa, Justin Chon, Freddie Wong, Harry Shum Jr. Far East Movement, and David Choi, among others.

“YouTube gave a space for people that weren’t accustomed to showing off their talent,” Chan said. “It’s like, ‘Here’s a playground; do what you’re best at even if no one knew you were good at it.’ It just kind of showed off human ability and skill, not just for Asians either.”

“If you just listen to one of our videos, you would have no idea that [the actors] are Asian,” Wang added. “I think that’s what we want, just for people to see us as American instead of Asian-American.”

While Wong Fu continues to push the boundaries of digital media with its interactive webseries and long-form videos, it centers the majority of its content around relatable topics: falling in and out of love, the complications of friendships, and building relationships.

“There are so many things to see and so many things to capture, share with people in a photograph, and I think the same can be said about our videos or our stories,” said Wang, who hopes to soon explore the biggest cave in Vietnam. “There’s a lot to see in the world and we want to share it.”

A decade in, Wong Fu is only getting more ambitious. The three recently started preproduction on a full-length feature film they’ve described as a mix of 500 Days of Summer and Eternal Sunshine of the Spotless Mind.

And somehow through all the group’s success, Wong Fu is still shocked by their fan’s overwhelming interest in each of their lives.

“It is surprising when you’re reminded how much people know about you because they watch our Wong Fu weekends,” Chan said with a grin. “You’ll get to know us really well, everything from childhood to interests to favorite kind of food or how we act. You meet someone and they’re like, ‘Hey Wes,’ and then they bring something up and you’re like, ‘How did you know that? ‘Oh yeah, I told you; I told two million people.