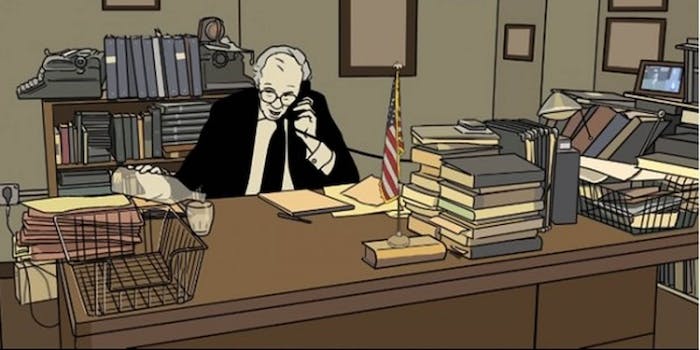 The webcomic behind Get Your War On has a new webseries about Internet surveillance, and it's awesome.

For more than seven years, David Rees unflinchingly satirized the Bush administration with his Get Your War On webcomic. For his next act, the humorist is taking on the recent NSA surveillance scandal with Codefellas, an animated webseries set at a government agency similar to PRISM.

Codefellas stars John Hodgman, fresh off the release of his online special, as the voice of Agent Topple, a government agent, and comedian Emily Heller (who previously starred in Above Average’s very funny fortune telling spoof, The Future), as Nicole Winters, a young hacker in his employ. Topple assigns Winters to a top-secret surveillance program, all while babbling on about clandestine government projects and his own bizarre personal life. The end result lies somewhere between Doonesbury and Archer.

Amazingly, Codefellas began production before the NSA scandal hit the presses, making its “ripped from the headlines” format an amazing coincidence. David Rees is either the luckiest creator in the world, an incredibly fast editor, or a secret government agent. Take your pick.

Codefellas lives on the official Wired channel; the tech magazine launched its YouTube home in May as part of Conde Nast’s expansion onto the platform, and Rees’ effort is one of its first series. Thanks to its timeliness, Codefellas’ first episode has already received more than 266,000 views. With 11 more episodes to come, an undoubtedly talented cast, and a master pencil sharpener at the helm, it has a chance to become the first smash hit across Conde Nast’s network of YouTube channels.