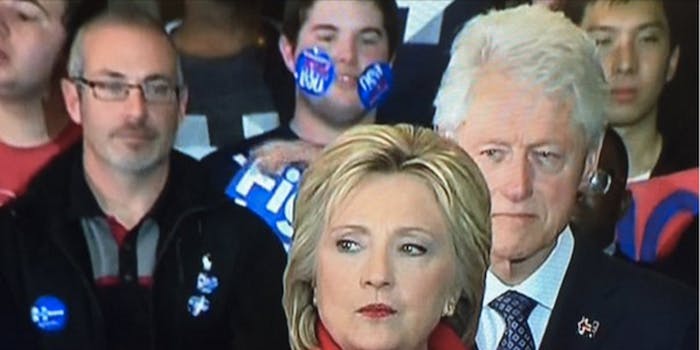 The real winner of the Iowa caucus was #stickerboy

Who won the Iowa caucus?

Was it the Ted Cruz, who bested Donald Trump with a commending victory on the Republican side? Was it Trump himself, whose speech showed an unexpected degree of humility rendering him slightly less of a cartoon character and more a fully-formed human being? Was it Bernie Sanders, whose virtual tie with frontrunner Hillary Clinton showed the strength of his insurgent campaign? Was it Hillary, who at least did better then her 2008 Iowa caucus showing—a third place finish behind John Edwards? Or was Martin O’Malley and Mike Huckabee, both of whom quit the race to presumably start a chill neighborhood dad Doobie Brothers tribute band?

Nah, the real winner was the kid with stickers on face in the background of Hillary’s victory-ish speech.

Sticker guy’s name is Peter Clinkscales. He is a student at Drake University, where Clinton was speaking.

Clinkscales told Mashable that he’s still undecided about which candidate he supports. He simply saw that a presidential candidate was speaking at his university and felt that it was his civic duty to check it out.

#stickerboy is not a Clinton supporter, still undecided but came here because: pic.twitter.com/dqaNdtLjg0

He added that he had initially planned on bringing a saxophone. Instead, he settled on eating a sticker, which is also an excellent option.

Twitter immediately declared Clinkscales, aka “sticker kid” or “sticker guy,” the political version of the left shark from Katy Perry‘s 2015 Super Bowl halftime show. This is the highest honor Twitter is capable of bestowing on anything.

I think it's going to be a tight race. Best of luck to our competing sticker hashtags

Clinkscales’s reaction to his sudden and unexpected viral face was the best victory speech of the night.