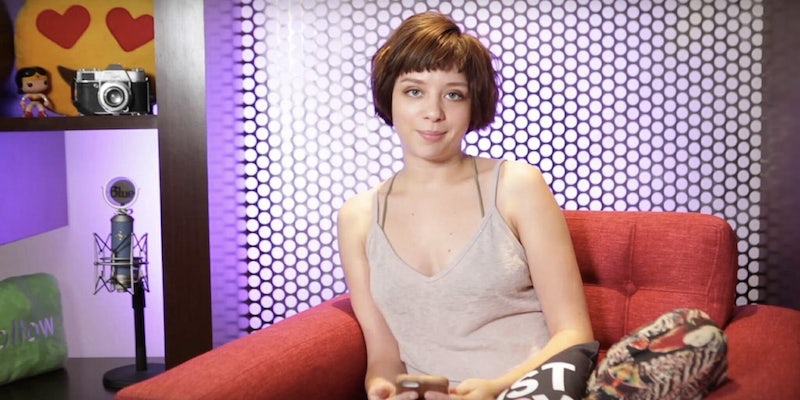 Catch viral videos and trending topics before everyone else—but with a feminist slant.

“Sometimes things piss us off a lot.”

That’s host Anna Lore gives in What’s Trending Fem’s inaugural video. In the teaser trailer posted a day before the channel’s official debut, she promises to alert viewers to viral videos and trending topics before everyone else—but with a feminist slant.

The teaser video lists Hayley Hoover as the writer and producer of the channel, which makes sense: Hoover’s Internet footprints extend back to the beginning of YouTube itself (she was one of the first 1,000 members of the site), when she got her start as “Thursday” on the channel fiveawesomegirls and on her solo channel, where she continues to make videos about everything from Harry Potter to sexual harassment.

What’s Trending Fem has a cast of rotating hosts: Anna Lore, Ava Gordy, Whitney Moore, Kylie Sparks, and Jay Walker. The format is similar to that of What’s Trending: Each episode is generally two minutes long, with a segment breaking down the viral content and a segment reacting to it, usually by providing commentary or reading tweets.

But what makes What’s Trending Fem different from its parent channel is the type of trending topics it chooses to cover. Anything from Pretty Little Liars to BuzzFeed posts is fair game, but the events involve more hot-button issues such as sexuality, race, and gender. The channel’s first official video slammed the stationery, lighter, and razor company Bic for its South African “Think Like a Man” ad campaign. The channel has since covered other Internet flare-ups including the harassment claims against MuggleCast host Ben Schoen and the Caitlyn Jenner Halloween costume.

While What’s Trending and What’s Trending Fem take a modern approach to news, choosing to cover solely Internet content, the concept itself is unexpectedly antiquated. It could feel somewhat like reading a book about movies, or a newspaper article about blogging. It is unlikely that anyone watching these videos has found them without already having encountered the viral content, considering you’d have to already be plugged in to Internet culture to discover the channel.

For a concept like this to stay afloat, it can’t just tell the viewer what they likely already know. It has to move things forward, which is what gives What’s Trending Fem an advantage. Its feminist angle allows room for not just critique, but also discussion, which is the basic ingredient needed for any kind of change. In aiding the Internet in kicking up a fuss about Bic’s ad campaign, the channel was one of many voices that prompted Bic South Africa to take down the ad and issue an apology on its Facebook page.

One month and 1,695 subscribers later, What’s Trending Fem is climbing its own way up the viral video ladder. The channel’s most popular video sits at a cushy 18,912 views, with most other videos pulling in between 1,000 and 5,000. What’s Trending Fem may also be at the mercy of what is truly viral, but as far as its hosts are concerned, feminism is always trending.