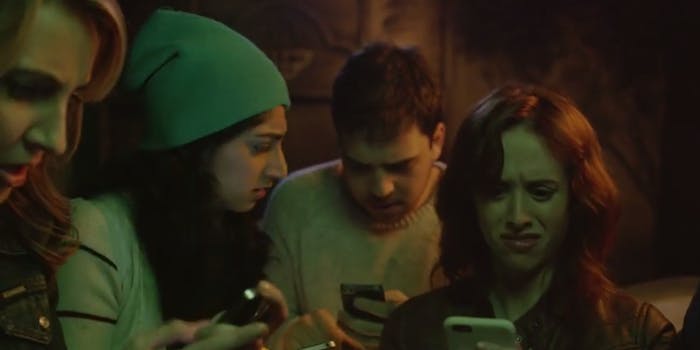 Every year around Halloween, we pause to reflect upon those elements of life that scare us: terrifying ghosts, unstoppable monsters, receiving the wrong costume from Amazon two days before your party. In a short video from YouTube channel Paul Gale Comedy, we see what truly horrifies a group of 20-somethings as they explore a spooky, abandoned mansion.

There is no Internet service or outlets to charge phones—the horror.

Our group of explorers slowly freak out as they discover the grisly reality that they cannot post their findings to Instagram; that they are losing Tumblr and Facebook followers by the second; and—worst of all—a Tinder date cannot be finalized.

Sure, the single-joke premise runs out of steam faster than Google Fiber, but the video is strong enough to stand out. I especially enjoy the young woman who shies away from a real life “I love you” from one of her friends, clarifying that she instead wishes to receive such sentiments from people that she doesn’t know.