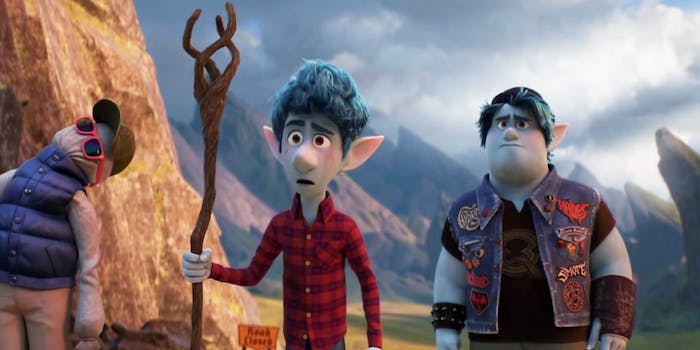 How to watch ‘Onward’

There's still (a little) magic left in the world.

The one upside–and I do mean one–to this whole Covid-19 situation is that big movie studios are releasing movies still in theaters online to stream. Among these early releases is Disney Pixar’s Onward.

Set in a world inhabited by mythical creatures, magic is real, but incredibly cumbersome. In fact, it’s nearly a dead art. That’s not going to stop Ian and Barley Lightfoot, two plucky teenage elves from searching out this magic to see their dearly departed father one last time.

Here’s everything you need to know to rent or buy Onward.

When will Onward release?

Onward will be available to stream Friday, March 20 at 8pm EST.

The easiest way to stream Onward

The long-awaited streaming service will also sport one of the most beloved libraries of streaming content online. This accounts for 500 Walt Disney Studios movies and 7,000 episodes Walt Disney Television. Productions from Pixar, Marvel, Star Wars, and National Geographic, all being members of the Disney family will also be available, as well as 30 seasons of The Simpsons. Plus, like any streaming service worth its salt, there are exclusive original productions including Lady and the Tramp, Wandvision, Monsters at Work, and of course, Onward. One subscription works on up to four devices, and you can even download content directly to your device to watch anytime.

How to stream Onward online

Onward is a theatrical release, but Disney recently announced it would offer films like Onward on demand, considering many in the world will be under quarantine. Here are your options to rent or buy Onward.

The online retail giant is also one of the premier destinations for online streaming. This is the easiest way to watch Onward, no question. If you already have an Amazon account, buying in either HD or 4K will take seconds, and you can watch it anywhere you stream Amazon Video, from Amazon Fire Stick to Roku.

Fandango and movies go hand in hand, and not just when it comes to buying tickets online. Plenty of hits and classics are available in the FandangoNOW library, along with full seasons of your favorite shows. Onward is available on FandangoNOW in multiple formats. If you join Fandango VIP, you can rack up points to spend across Fandango and FandangoNOW.

Vudu is a no-fuss way to rent movies online if you don’t want to bother signing up for anything. There’s a massive library of high-quality video content, including 4K movies. There are even piles of movies you can watch free as long as you sit through a few ads. Onward is available to buy right now, in SD, HDX, and UHD. You’ll have to wait a little longer if you want to rent it.