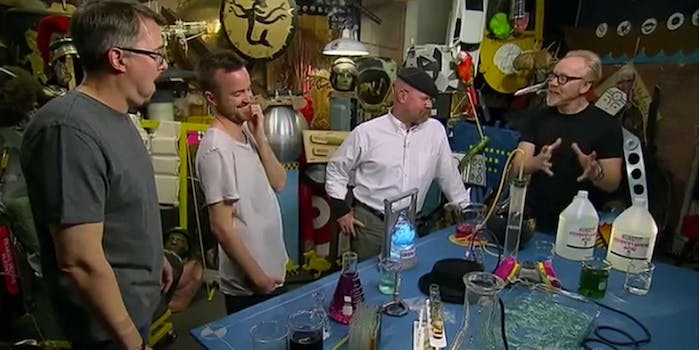 Vince GIlligan and Aaron Paul guest-star as the MythBusters explore some "crystal myths."

Heisenberg probably wouldn’t be too happy about this.

MythBusters, which has been proving and disproving myths of all shapes and sizes since 2003, aimed big for their upcoming special episode. With only eight more episodes until the end, Adam Savage, Jamie Hyneman, and the rest of the MythBusters gang recruited Breaking Bad creator Vince Gilligan and actor Aaron Paul (Jesse Pinkman) to put some of the scientific concepts presented in the show to the test.

In the trailer released by Discovery, the episode promised to be an array of unstable flashes and explosions as Savage, Hyneman, Gilligan, and Paul reenacted a classic scene from the first season. Savage takes on the role of drug kingpin Heisenberg, trying to move a shipment of  “crystal myths.”

U.S. viewers have to wait until Aug. 12—one day after the Breaking Bad season premiere—to watch the MythBusters test out those theories, but someone decided to give us a sample a few weeks early.

womenweedweather1 posted the unlisted video to Reddit earlier Thursday, and fans of both shows in r/videos are excited for the episode. The video was posted to YouTube on Jul. 21, and one redditor expressed excitement that the video hadn’t been taken down yet. Others pointed out scientific inaccuracies in the experiments, but mostly everyone is in agreement on one thing: the new season of Breaking Bad —the highly anticipated conclusion of the series—can’t come soon enough.

For some Australian fans, they were surprised that the episode hasn’t aired in the U.S. yet; they’d seen it weeks ago.

“Mythbusters is produced in Australia by the Australian production company Beyond Television (despite being filmed in [San Francisco]),” Synth88 explained. “Hence why we get it much earlier than everyone.”

Watch the entire MythBusters Breaking Bad special below before YouTube takes it offline.