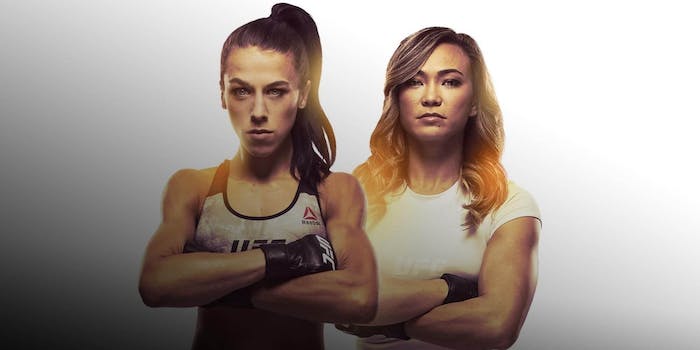 How to stream Joanna Jedrzejczyk vs. Michelle Waterson on UFC Fight Night

Joanna Jedrzejczyk used to be a UFC nightmare. Can she regain her winning ways?

Not long ago, Joanna Jedrzejczyk (15-3) was the most terrifying fighter in the UFC. Even at 115 pounds, she somehow inspired more fear in opponents and fans than even heavyweight monsters like Francis Ngannou and Stipe Miocic. Between 2015 and 2017, Jedrzejczyk—who fights Michelle Waterson on Saturday in a fight you can live stream on ESPN+— ruled over the women’s strawweight division with a mixture of striking brilliance and psychological intimidation that, like Mike Tyson in his prime, paralyzed opponents long before they even entered the cage.

Once they did, the result was almost inevitably a one-sided and bloody beating that spoke to both kickboxing genius and a deep well of cruelty.

During her two years as champion, Jedrzejczyk seemed invincible, like Jon Jones or Demetrious Johnson or Georges St-Pierre in his prime. Only Joanna was just as malicious as she was untouchable. She was that rarest of mixed martial artists: equal parts talent and terror.

Then along came Rose Namajunas and her damn underdog spirit, and in the blink of an eye. Jedrzejczyk’s malicious mystique was blown to bits. As soon as Namajunas landed her left hook on Jedrzejczyk’s chin at UFC 217 in November 2017 and Joanna (the unbreakable Joanna!) crumpled to the ground, the mask of indomitability fell from her face. All of a sudden, her ability to emotionally incapacitate her opponents (key to her black magic) was gone. The spell of the ‘bogeywoman,’ as she liked to call herself, was, at long last, broken.

Jedrzejczyk’s opponent Saturday in Tampa, Michelle Waterson (17-6), never had the ability to intimidate and never will. She lives on the opposite end of the MMA spectrum. She’s the kind of fighter who delights in just being in the cage, whose skills and athleticism aren’t accompanied by any apparent cruelty.

Before becoming a professional fighter, she was serving as a ring girl at an MMA event when she decided for the first time she wanted to toss away the round card, take off her high heels, and fight. Just like that. Jedrzejczyk approaches MMA like a woman who wants to exorcise demons by causing pain; Waterson approaches MMA like a woman who can’t believe she gets to fight for a living.

Three or four years ago, such a spirit would have been at Joanna’s mercy. Waterson would no doubt have wilted before all that malice and dissolved in the face of all those mind games. But three years is an eternity in the lifespan of a fighter’s mystique. Complete collapses have taken place in half that time. Now that Joanna has been laid low, the time is ripe for Waterson to make her move, to use her elegant high kicks and point-fighting karate style to slip past the beast and move up the rankings. Jedrzejczyk may still be one of the most dangerous fighters in the world, but at least now Waterson knows she’s human.

Here’s everything you need to know to watch Jedrejczyk vs. Waterson.

UFC Fight Night 161 in Tampa is being broadcast on ESPN+—the streaming service which, as of March 2019, signed a seven-year deal with the MMA organization to be the only home of UFC PPV telecasts and nearly two dozen UFC Fight Nights each year.

ESPN+ is a great way to stream all kinds of combat sports content. ESPN+ has halted its free trial, but the service only costs $4.99 per month or $49.99 for the entire year. Given how much content you receive, that’s a great deal (remember, you’re also allowed to cancel at any time).