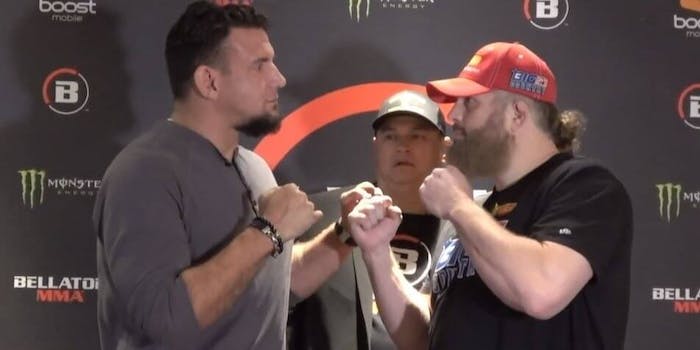 How to stream Frank Mir vs. Roy Nelson in Bellator 231

Two aging heavyweights are looking for one last hurrah.

Heavyweights Frank Mir (18-13) and Roy “Big Country” Nelson (23-17) are MMA legends with more than 70 fights and 40 wins between them. They’ve fought everyone and everywhere. They’ve won championship belts and reality television show tournaments and lost nearly as often as they’ve won. They’ve done it all. They’re in the book.

But the duo, who will headline Bellator 231 in a fight you can live stream on DAZN, is also ancient by MMA standards and long past their primes. Nelson (43 years old ) has lost his last three fights and Mir (40) his last four. Still, the strongest indication that Mir and Nelson aren’t the fighters they once were isn’t the losses; it’s how long it’s been since either man won a fight doing what he used to do best. Mir, who made his reputation as the first great submission artist in UFC heavyweight history, hasn’t submitted anyone since 2011, while Nelson—who used to carry inhuman power in his hands but who lost to Mir by unanimous decision in 2011 when they both fought in UFC—hasn’t won by knockout since 2016. When you’re over 40 and can’t do the thing that made you feared as a fighter, it’s time to give it up.

But mixed martial artists are a notoriously stubborn bunch, especially when it comes to retirement. To survive in their profession, they’ve had to convince themselves that they can take any kind of punishment, which means they’re averse by nature to acknowledging their own mortality.

In a perfect world, this wouldn’t be the case. Instead, Mir and Nelson would look at their fight at Bellator 231 on Friday night as a well-deserved curtain call: one last hurrah against a fellow veteran who probably can’t cause them too much additional damage and with whom they can celebrate long, fruitful careers by knocking each other around one last time. Retirement announcements would make tonight’s fight a thing of beauty rather than a cause for alarm. Even Bellator President Scott Coker has said as much, acknowledging that it may be time for two of his biggest stars to call it a day. Or at least one of them. Or something.

“This is the time they’ve got to deliver,” Coker said recently. “And I think it might be the winner moves forward and the loser goes home, maybe.” That “maybe” is a classic fight promoter’s hedge: Maybe the loser of this fight should retire, but then again, if another profitable fight presents itself, maybe he shouldn’t. In fight promotion, as in politics, the devil is always in the throwaway lines.

Maybe the best we can hope for from the fight is sudden enlightenment through violence, what the mystics call a Zen Slap: a moment when Mir and Nelson both realize that this is as good as things will ever be and that they won’t ever be this good again, that all their best moments are in the past, that they have nothing left to prove, and that nostalgia is the most dangerous temptation of all for a professional fighter—worse than money, worse than fame, worse even than glory.

Here’s everything you need to know to watch Mir vs. Nelson.

If you still have cable TV, you can watch many of the Bellator events on the Paramount Network, and for this card, that is indeed the case. You can watch it on cable via Paramount, or if you just want to stream it, you can fire up your DAZN app. A subscription to DAZN costs $19.99 per month or $99.99 for a year, and it’s been a great resource for combat sports fans.