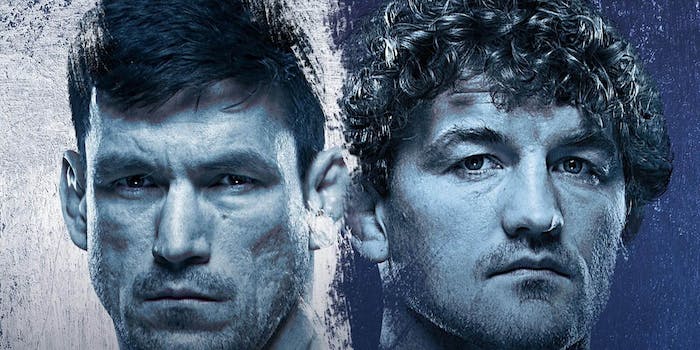 How to stream Demian Maia vs. Ben Askren

Two of MMA's most impressive artists will clash.

Depending on what kind of person you are, Saturday’s fight between Brazilian jiu-jitsu genius Demian Maia (27-9) and Olympic wrestling superstar Ben Askren (19-1-1) is either a once-in-a-lifetime chance to watch two of the greatest grapplers in MMA history play a subtle game of movement, leverage, deception, and misdirection at the highest skill level. Or their UFC main event, which you can live stream on ESPN+, will be inspiration to bash your head against the wall.

Unlike a striking match, which can be understood by just about anyone, grappling can be mystifying for those not familiar with its secrets. A fight between two masters like Maia and Askren can look to the untrained eye like an extended stalemate, no different than two people with no grappling ability holding on to each other and not letting go. A person could be driven mad watching that for 25 minutes.

But while the fight may be a tough sell for some, grappling fans who spend long hours rolling at Brazilian jiu-jitsu gyms and parsing ADCC videos on YouTube see Askren’s smothering top game and Maia’s back-control mastery as things of beauty. A fight between them gives a chance to see dual brilliance unfolding in real time. Imagine eavesdropping on the first and only meeting between James Joyce and Marcel Proust in 1922 or watching Van Gogh and Gauguin paint side by side in Arles. Those comparisons may sound ridiculous, but to deny that Maia and Askren are artists is unforgivable snobbery.

Besides, there’s little physical risk in painting or writing, but for artists who fight other artists, there’s the problem of finding an advantage. What breaks the stalemate between geniuses? Maia is the sport’s greatest submission specialist but Askren has never been submitted in his 21-fight MMA career, so what’s Maia to do? Askren’s finishes always happen on the ground, but Maia has spent his entire adult life training on the ground, so where’s Askren to go? Stifled at every turn, the two will undoubtedly look for different options.

And there’s the risk in Saturday morning’s fight that Askren’s genius will nullify Maia’s and Maia’s brilliance will paralyze Askren’s and in a panic, they’ll turn to their striking to find some advantage. This is the worst fear of every MMA devotee: that they’ll drag himself out of bed at some ungodly hour on a Saturday morning with hope in their heart only to spend 25 endless minutes watching two of the greatest grapplers in MMA history try to punch each other in the head. The mind trembles at the thought.

Here’s everything you need to know to watch Maia vs. Askren on UFC Fight Night in Singapore.

UFC Fight Night 162 in Singapore is being broadcast on ESPN+—the streaming service which, as of March 2019, signed a seven-year deal with the MMA organization to be the only home of UFC PPV telecasts and nearly two dozen UFC Fight Nights each year.

ESPN+ is a fantastic way to stream all kinds of combat sports content. ESPN+ has halted its free trial, but the service only costs $4.99 per month or $49.99 for the entire year. Given how much content you receive, that’s a special deal (remember, you’re also allowed to cancel at any time).

Preliminary Card | 5am on ESPN+