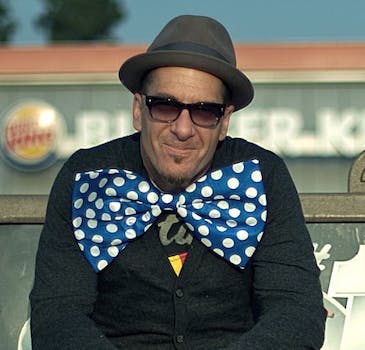 Ahead of his appearance at the Bridgetown Comedy Festival, the author discusses his beloved podcast, band, and standup comedy—and how he juggles all three online.

Greg Behrendt has been a professional comedian for 22 years and written a New York Times best-selling advice book, He’s Just Not That Into You, which was turned into a movie.

But the bigger they are, the harder they fall. After the hoopla surrounding the book died down, Behrendt wound up with huge audiences full of people who adored his book and were baffled and dismayed by his comedy.

It was at a trough in his career, and spirits, that he answered friend and comedian Dave Anthony’s call to start a podcast with him, Walking the Room, a weekly outing that finds the two ranting and riffing on various subjects, occasionally with special guests.

In the years since, Behrendt has adopted a suite of formats to express himself. He’s started a band, developed a clothing company (Estoy Merchandise) and consulted on television shows. In the process, he’s become an object lesson in social media synergy for creative types.

“I have a blog for the podcast, for the band, and for myself,” he said, “and I publish under those three headings. I tweet, I Facebook. Everything. Social media is a really cool way to tell your story to people who are interested in hearing it. It’s not getting put through the filter of a television executive who’s decided you’re too old to justify the expenditure.”

Being “too old” for the entertainment industry is an issue Behrendt has struggled with. Podcasting has cheated the switches on that, turning it from a reality into a perception.

“You don’t have this problem with books,” he said, “but there is a limited space on network TV and films. There’s so much money being put in, they have to make executive decisions on where to spend their money and unfortunately that rules a lot of people out.”

By using social media, he’s been able to address the people who like what he does and build back an audience he can fall in love with.

“I don’t have a massive fanbase,” he said. “I don’t have Patton Oswalt numbers, but the fanbase I have is incredibly generous, and of the 22,000 people who follow me on Twitter, I think almost all of those people participate.”

Behrendt’s band, the Reigning Monarchs, play a blend of music that sounds like an A&R executive’s fever-induced nightmare: ska-punk-surf-reggae. And yet, when they went out on Indiegogo to fund a new full-length LP, tour, and documentary, people stepped up. The group raised almost three times the amount they had initially asked for, the final total reaching just shy of $27,000.

“If you just tweet, people are going to go “fuck you,” Behrendt said about the campaign, “but if you record a video, if you communicate, it’s all different. It’s absurd to think people would give money to a surf and ska band full of 40 year olds and one about to turn 50. But they did.”

A significant part of the campaign’s success has to do with Walking the Room’s approach and longevity.

“When Dave and I went to do our podcast, we weren’t anywhere,” he said. “All we had was our frailty, our aspirations, and our failure.” Every achievement they’ve made since then was based firmly in that sad triangle.

“I wanted to be in a band, I wanted to have a T-shirt company, and Dave has wanted to be taken seriously as a comedian for as long as he’s been doing it, but he always shot himself in the foot, and now he’s not.”

The only thing that “hasn’t come back fully,” he said was his standup. He’s still not filling rooms like he did at the height of his celebrity. But Behrendt seems OK with that. “So many people keep doing things when they don’t have anything to say. Unless I really have something to say I don’t want to do it.”

The podcast remains one of the formats in which Behrendt finds he still has something to say and wants to keep doing.

“Dave and I discovered we are a comedy team,” he explained. “When we sit down, he hits a button that allows me to make comedy, the type of comedy I’ve always wanted to do but have never been able to, truly immediate, extemporaneous comedy. When I find myself shucking and jiving on stage these days, I tell myself: Remember to talk to Dave.”

Behrendt will tape a live episode of Walking the Room at Baghdad Theater Saturday night as part of the Bridgetown Comedy Festival.