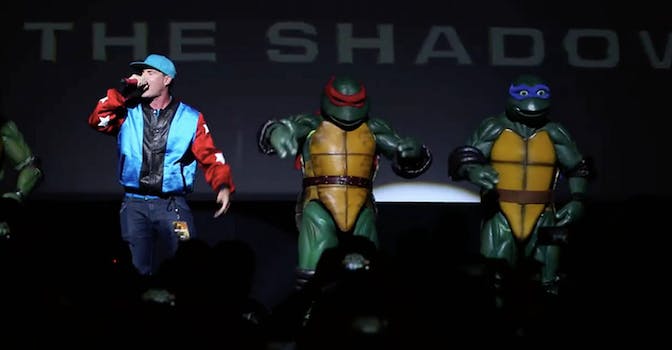 For some reason, he performed "Ninja Rap 2," not the original.

Vanilla Ice gave a surprise performance at the Teenage Mutant Ninja Turtles: Out Of The Shadows premiere event, but the “Ninja Rap” he performed is not the one his fans know and love.

The rapper’s iconic appearance in 1991’s Teenage Mutant Ninja Turtles II: The Secret of the Ooze included a performance of the “Ninja Rap,” featuring the lines “go ninja, go ninja, go,” and some very early-90s style dancing and lyrics.

At the Madison Square Garden event Sunday, Ice performed “Ninja Rap 2,” a track released in 2005 that is more hardcore and features lines like “When I’m in the club people show me some love/I’ve got the mic on tight like OJ wears his gloves” and references the Insane Clown Posse.

The performance at the premiere had little to do with the original “Ninja Rap,” except for referencing the “go ninja, go ninja, go” refrain and that he had some classic turtles on stage with him.

If there’s ever been a moment that defines mixed message nostalgia, this is it.