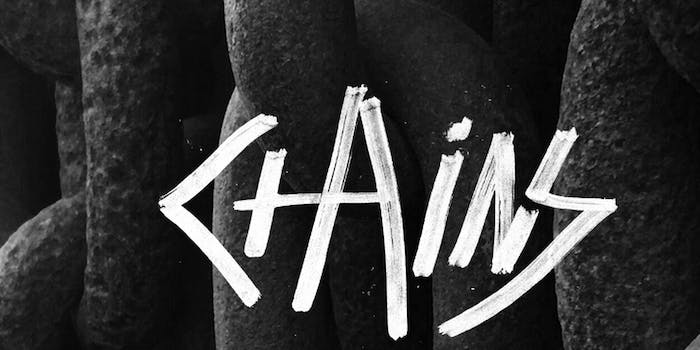 The Tidal-premiered song stops playing if you look away.

Rap legend Nas and R&B headliner Usher have sold a combined 100-million albums worldwide across their Billboard-attacking careers. Now the pair wants to stitch the victims of police brutality and racism-driven murder into your memory.

Joining forces with German artist Bibi Bourelly, their cinematic new song, “Chains,” debuted Friday on Jay Z‘s streaming music platform Tidal. Beyond recording and dispensing the track, “Chains” is engineered to make sure you don’t look away—literally. The song plays when granted access to your webcam, and it pauses if you switch tabs or change applications.

Upon listening you’re served a jarring rundown of American criminal justice system victims—both people killed by police and murdered without a conviction.

“They put me in chains,” Usher sings on the hook. “Shame on us.”

For his part Nas swerves into a comfortable lane of writing about perennial injustice through the prism of the African-American experience, while name-dropping black luminaries. He never fails to deliver on these types of guest verses.

Accompanying the track, black-and-white images of the victims—Trayvon Martin, Rekia Boyd, Caesar Cruz, Ramarley Graham, Kendrick Johnson, Marlon Brown, Andrew Joseph, Sean Bell—appear with brief news copy. Here’s one notable example: “Sean died when his car was shot 50 times by undercover NYPD officers on the morning of his wedding day. He was unarmed. The shooters were found not guilty.”

It’s also worth noting that the song is not strapped behind a Tidal paywall, and any kid on Twitter can take in the interactive presentation. “Chains” proceeds will go to Donor Advised Fund managed by social-justice organization Sankofa.org.