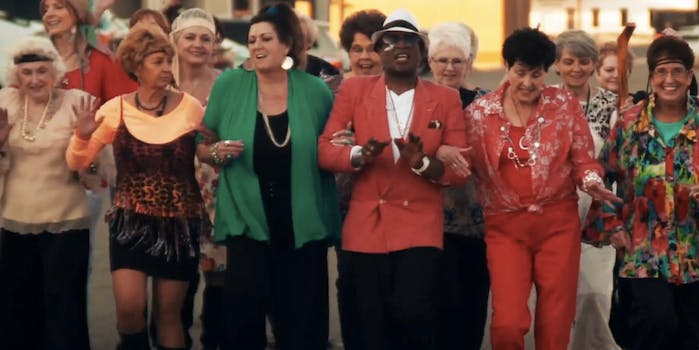 These senior citizens are more funky than you'd ever imagine.

Bruno Mars and Mark Ronson might be courting a retro feel with their chart success “Uptown Funk,” but YouTuber Alex Boye gives it a real vintage feel by adding senior citizens to his parody cover.

Boye commands a gaggle of two-stepping grandpas in the “Oldtown Funk” cover, shuffling along, driving a scooter around the parking lot, and being flanked by beautiful women. The ladies in question are part of the Dancing Grannies, a Milwaukee-based squad of senior women who perform at parades and halftime shows.

A 92-year-old woman does the splits, which deserves a VMA in and of itself. All in all, the senior citizens involved have raised 500 children, 1,200 grandchildren, and 250 great-grandchildren between them. That’s a lot of funk.