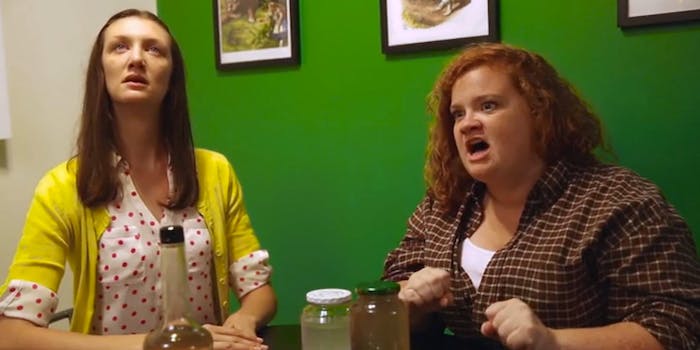 'The plot is pretty much driven by women's needs in their lives and how to survive.'

Paying your rent by selling homemade hooch? That’s the premise of Under the Table, a new webseries debuting today via BitTorrent Bundle.

Three roommates living in Los Angeles—Riley (Cindy Chu), Ang (Maggie Monk), and Lisa (Michaela Myers)—hatch a plan to pay rent after it’s discovered that the credit card scam Ang’s involved in has been compromised. To lure in a younger generation of potential clients, they set up a an ill-advised Harry Styles kissing booth near a school. In another episode, Lisa advertises the hooch (and their home address) via YouTube, which invites the interest of the LAPD.

Series creators Lauren Davis, Andra Whipple, and Hanna Bowens all met while working at CollegeHumor, and like most great ideas, the seeds of Under the Table were planted at a bar. Davis says she and Whipple were “talking about lack of diversity and lack of opportunities for women who don’t fit specific molds,” and decided the world needed a series about “a bunch of idiots who brew their own hooch.”

Why hooch? Davis went to school in Richmond, Virginia, where there is a legit moonshine culture. “There’s something hard and visceral about moonshine,” she says, and wanted the series to reflect that feeling.

Under the Table was crowdfunded last September on Indiegogo, and the description notes that they want to “help prove women aren’t funny.” Davis says this was around the time when Michael Eisner made public statements about how it’s hard to find women who are funny and beautiful, and the funding of a webseries starring, created, directed, and written by women was a chance to poke holes in that particular misconception.

The five-episode series sticks to this focus. There are no romantic relationships—”the plot is pretty much driven by women’s needs in their lives and how to survive, and their incompetence at doing so,” Davis says. It’s been compared to Broad City, and Davis thinks that show resonates with women and men because “it’s honest, and captures the way we talk to each other, the way we view ourselves.”

She adds that they partnered with BitTorrent because they support independent filmmakers, and the platform has been elbowing its way into livestreaming and original content. Missy Laney, who recently joined BitTorrent as director of creative initiatives from Sundance, says Under the Table is yet another flag planted in terms of representation: “Hanna, Lauren, and Andra are the latest in the line of comedic talents who are helping to authenticate portrayal of women in media.”