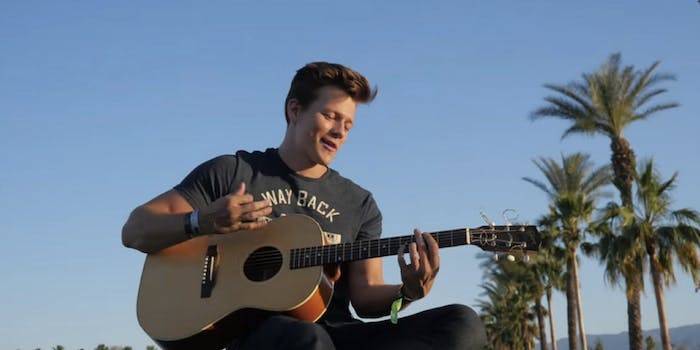 Ward's new 'Yellow Boxes' EP offers him a chance to be honest with his fans.

During a van ride between tour stops in Houston and Dallas, YouTube-bred musician Tyler Ward said he knows this new tour is the first time in a while he’s really been himself.

“I want to be this brand, when in my day-to-day life I was not,” Ward told the Daily Dot. “I knew it was the right thing to do, I wanted to inspire people, but I felt like I was living a lie. I’d post something, and I’d want to get there, but I couldn’t live that.”

Fans thought they knew the 27-year-old singer’s unique brand before now. He’s been making a name for himself as a musician since 2008. Back then he had five labels trying to offer him deals, but Ward turned them all down.

“Part of me thought it would be smart if I wanted to be mainstream and big,” Ward explained. “But part of me was like, ‘I really enjoy the business aspect of it, the creative aspect of it, the independent spirit of it. It makes more sense and it’s more satisfying and genuine if I can keep it in the vein of doing it myself.’ Granted, I’ve made thousands of mistakes, but with the mistakes comes clarity with running a business.”

Now when the labels do come calling, it’s for his expertise at crafting a social media–based career for up-and-coming artists.

“The traditional world is coming to me: ‘How can we do this? Do you want to partner with us?’” he said.“It’s kind of been a role reversal.”

His most recent EP, Yellow Boxes, hit retailers Oct. 1. Original music is Ward’s passion, but he’s also known for cover tracks that he could build a brand and business off of thanks to YouTube revenue, iTunes sales, and now streaming services.

“The bread and butter has always been creating searchable covers for iTunes,” Ward said. “If you’re doing a cover song, we used to just put it on YouTube. But now I’m finding that not only is YouTube the platform, but Pandora or Spotify or Apple Music too. There’s thousands of revenue streams that add up.”

His most popular track is a cover of Maroon 5’s Payphone, with 23.5 million views, but several of his tracks are in the tens of millions. He also earns a living from his consistent Patreon supporters, which functions as a consistent paycheck to keep Ward’s art going in a fluctuating world.

“I can put out three videos and know exactly what I will bring in that month,” he said. “It keeps me not worrying about finance. It makes me take risks, and it helps people find their voice.”

It’s all part of the role of a social artist, to keep building his platform.

“You have to continue to feed the beast,” Ward explained. “It’s creating art as you go, on the road, from my bedroom, posting something daily. People are so inundated with content, so you have to find clever and creative ways to keep it fresh and meaningful.”

For Ward, this tour and EP represent a turnaround in how open and honest he is with his fans. Following his last tour, Ward made a decision to fight his alcoholism and stop hiding those issues.

“I feel a strong conviction to get up on stage and be as vulnerable and transparent as possible,” said Ward. “What’s been good to me is to talk about those things.”

Ward said a year and a half ago he realized he’d pushed friends away, surrounded himself with “yes men” and succumb to his vices, all while putting on a front for his fans.

“There was a moment in my life where it was a come to Jesus moment,” he said. “It was a question of ‘you’re either going to continue living this way or do another way.’ There’s been a huge transformation in a year and a half, and I felt like this tour needed to represent that: the purpose behind creating, the reason behind why I fell in love and found success. I didn’t find success for me; I found success for other people for them to realize they’re not alone.”

Ward’s been connecting with those fans on a 26-city U.S. jaunt followed by overseas dates in support of his album, and he said for the first time he’s felt like he isn’t hiding.

“I can be me, and the fact that I’ve learned to be me throughout this entire process, especially in these last two weeks, it’s so liberating,” Ward said. “I don’t feel like a fake or a phony for the first time in forever. I can’t even tell you the difference between faking a brand and living a brand. I am 100 percent OK with people knowing it now, because I have accepted it for myself.”