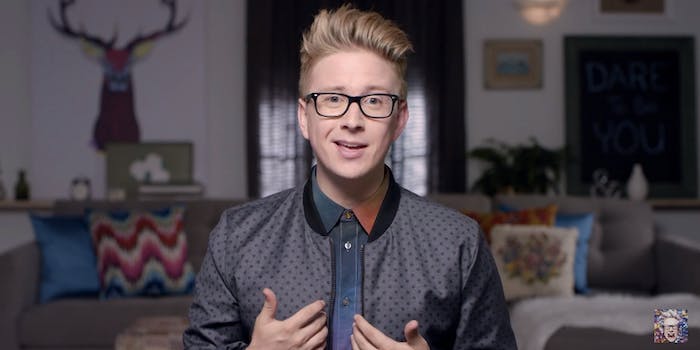 New faces of YouTube ads represent the diversity of the platform.

Lilly Singh and Tyler Oakley want you to give YouTube a chance.

Oakley and Singh, who boast just under 14 million subscribers between them, began appearing in print, digital, and television spots promoting their own channels, as well as YouTube as a whole, on Sept. 8. They follow other breakout YouTube stars like Hannah Hart, Michelle Phan, and Dude Perfect as part of YouTube’s advertising initiative.

Oakley’s ad focuses on the creating being himself on the platform, with the tagline, “Dare to be you.” It got a particular bump on social media when it aired during Stephen Colbert’s inaugural The Late Show episode.

me swearing at @tyleroakley's commercial while watching the late show pic.twitter.com/K8zDHXPz7l

Just saw a commercial for @tyleroakley while watching the Late Show and it was such a happy surprise!

So @tyleroakley just had a commercial during the #LateShow premier. #TeamInternet is unstoppable.

Singh and Oakley both have a lot on their plates for the fall. Oakley is finishing a world tour before releasing his debut book and starting another tour in support of that project. Singh finished her A Trip to Unicorn Island international tour this summer, and will be releasing a documentary film about her and her fans this fall. Singh’s ad focuses on her wildly popular character work, with the tagline “You give life character.”