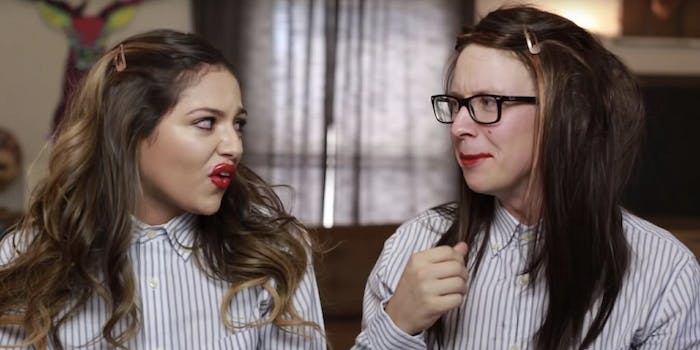 It's all about a dominant red lip and hair clips.

Imitation is the sincerest form of flattery, and in a recent video between YouTube stars Bethany Mota and Tyler Oakley, they go the distance impersonating a fellow YouTuber—even if it requires an excessive amount of rep lipstick.

Last year Mota and Oakley shared the stage at the Teen Choice Awards as Choice Web Star Male and Female, and now they’re collaborating for the first time to celebrate YouTuber Miranda Sings by copying her iconic style.

The video is part of Auguest, Oakley’s annual monthlong collaboration effort each August. While he fills most of the spots with fellow YouTubers, he usually reserves the final spot for a mainstream celebrity. In the past that’s included One Direction and Glee star Darren Criss. There haven’t yet been any clues about if a celeb will show up this year or who that celeb might be.

Auguest wraps up next week on Oakley’s channel.