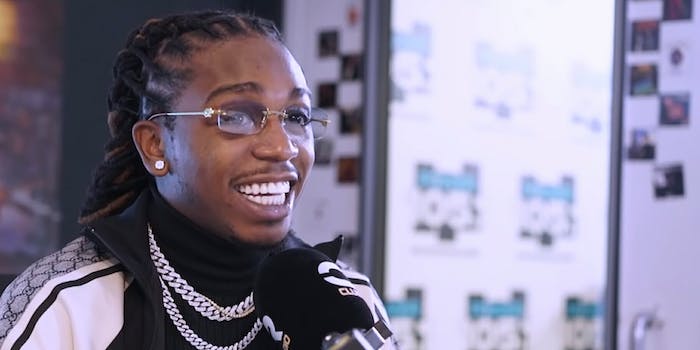 Jacquees launches Twitter debate after calling himself ‘King of R&B’

The only consensus is that it's not Jacquees.

After Jacquees, a popular 24 year-old R&B artist, shared a video declaring himself the current “King of R&B,” many people disagreed—and the search for the true King of R&B commenced.

“I just want to let everyone know that I’m the king of R&B right now, for this generation,” Jacquees said in his video. “I understand who came and did that and that and that, but now its my time.”

Jacquees, whose real name is Rodriquez Broadnax, grew in popularity earlier this year after his cover of “Trip” by Ella Mai went viral. His cover was eventually taken offline because it grew more popular than the original, and many agreed that they liked his version more. Now, some Black Twitter users think the popular cover may have made the singer a little too confident in his abilities.

I blame y’all. Y’all gassed up Jacquees’ version of Trip and now this man thinks he invented music

More popular contenders for the king of R&B title include Tank, Maxwell, Chris Brown, Usher and Trey Songz, who had a very short response to Jacquees’s claim:

Another prominent voice in R&B, J. Holiday, posted a video of himself calling Jacquees’s claim “bullshit.”

J Holiday is not happy with Jacquees calling himself the King of R&B. pic.twitter.com/XyuWVRcmQ3

For years, R. Kelly was regarded as the top male R&B artist because his singing and performance styles influenced many younger singers. But some argued that his alleged sexual harassment over the years disqualify him from the debate.

While Jacquees is lying in yodel, I would thank you all to stop bringing up R. Kelly in the king of r&b conversation. Only thing he need to be king of is a jail cell. pic.twitter.com/O7ke6pDyci

Even singer John Legend weighed in on the subject, with the most neutral response of them all. “I think the throne is open right now,” he tweeted.

Honestly I don't think there is a king of r&b right now. Anyone consistently dominating the charts, selling out arenas, etc, a la Usher at his prime. Not a comment on quality. I think the throne is open right now.

These days, it’s hard to tie one artists to one particular genre. Artists like Bruno Mars, The Weeknd, and Frank Ocean blur those lines by being simultaneously categorized in other music categories and make it difficult to place them as contenders. In the end, your king of R&B may very well depend on what your definition of what R&B is.