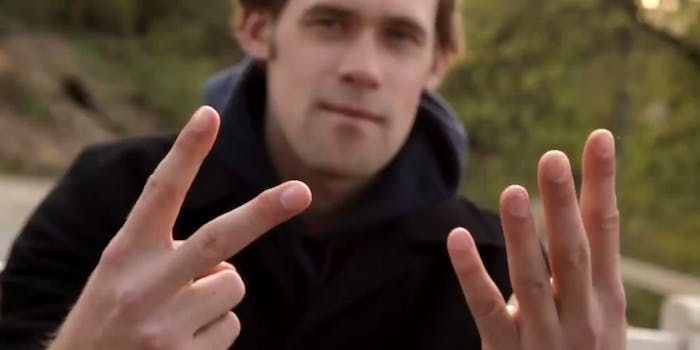 Turning 24 isn't easy. But Pat Stansik admits, he may regret this video by the time he's 30.

Nobody said your mid-20s were easy (except, you know, everyone over 27). For Denver, Colo., advertising intern Pat Stansik, the best remedy lies in self-deprecation.

Stansik, a University of Michigan graduate whose YouTube channel has accrued nearly 1 million views since its 2008 launch, celebrated his 24th birthday yesterday with the release of “I’m 24,” a rap parody detailing all of the common afflictions faced by today’s disenfranchised youth.

Backed by five of his best bros, all of whom look like they studied economics and played college lacrosse at Bucknell University, Stansik spits with a junior associate’s wit, flipping through a few of the upper middle class’s favorite clichés (“I don’t want to get married, but I could see myself settling down in a few years if I met the right girl”) in khakis, a tucked-in button down and v-neck sweater.

“My vocab’s changing,” he raps. “I say things like ‘For good measure.’ And when I get free time, you know I’m reading for pleasure.”

Somebody tell Stansik that age is just a number—just like “A Millie.”