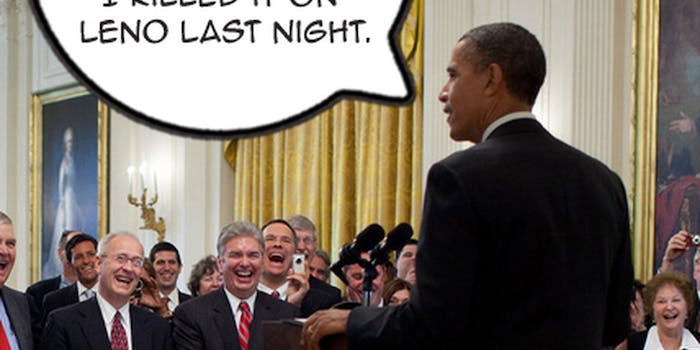 The official White House Flickr page is stocked with photos of President Barack Obama laughing with everyday Americans, talking with politicians, and sitting in silence.

No one really knows what goes through Obama’s head when these photos are shot, but one clairvoyant Canadian thinks he has an idea.

Jeremy Watt, 29, of Toronto, is the creator of Barack Obamic, a two-year-old Tumblr featuring images of topical, pop culture related, and hilarious word bubbles added to photos of the commander-in-chief.

Watt keeps in mind that one day the president, himself, might see this. So unlike many parody and humor sites, he keeps it relatively clean, although he has snuck in a naughty word here and there.

“I take the ‘invite me to the White House to play basketball’ approach, rather than the ‘put Secret Service on this guy’ approach,” Watt told the Daily Dot. “It’s more difficult to write clean and hit that LOL chord with people. Staying topical is a big part of how a given comic is received.”

These comics include an Obama family photo with the president thinking “Michelle did you tell the photographer that we have that Groupon?” and Obama ordering some pizza.

Watt is the co-founder of Conversated, a brand development agency that works with YouTube stars like dormtainment and Kip Kay.

Growing up, Watt day dreamed about becoming a famed cartoonist like Todd McFarlane but instead settled on graphic design. He started Barack Obamic on April 30, 2009, six months after Obama’s decisive presidential because “even Canadians wanted to be part of the change he was bringing to the White House,” Watt said.

“He’s brought a certain swagger to the job that makes it easy to come up with these compositions,” he said. “I subscribe to the [White House] photo stream feed and usually wait for an image to inspire me. The comics that perform the best are the ones where the words come immediately after seeing the image.”

Watt plans on turning Barack Obamic into a book sometime in the near future. But in the meantime, he hopes Obama wins re-election.

“I wish him the best in the upcoming election and in a small, comedic way I see the blog as a way I can support his campaign without the ability to vote,” he said.