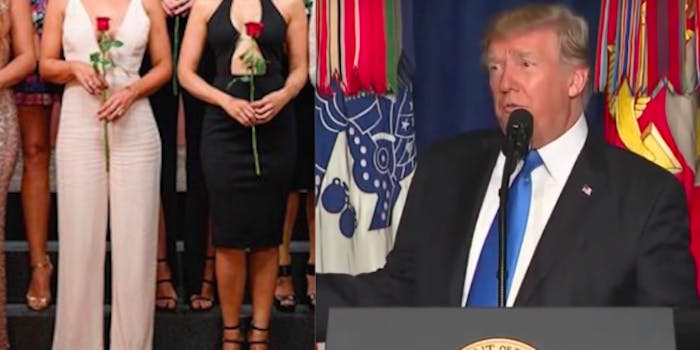 America has spoken, and President Donald Trump will not be receiving a rose.

We all know the feeling of anticipation for “our” show. The popcorn is popped, that shirt with a hole is on, your pants are off, and all distractions have been kicked out of the room. But on Monday fans of the Bachelor in Paradise were interrupted at the worst time. Right before the episode-culminating rose ceremony, which they’ve waited three episodes for, they were interrupted by the president.

On Monday ABC cut off its normally scheduled programs to air Trump’s speech on the nation’s new Afghanistan strategy. Sure it was an important message from the White House, but Paradise fans were already on edge with how long they’d been waiting for a rose ceremony. Like, we thought it was never going to happen. New Yorkers didn’t get to see the episode at all because of football coverage, and the rest of the country only made it through half of the episode—I don’t know what’s worse.

Fans were so devastated by the inconvenience that they took to Twitter to release their anger.

Unless Donald is telling us who Raven gave her rose to, I don't care. #BachelorInParadise pic.twitter.com/9TbOj8Kysz

Yo, Trump, you gotta address the nation right before the rose ceremony we've waited 3 episodes for? #bachelorinparadise

To be fair, host Chris Harrison did warn fans that their favorite show may be cut short, so they should have been prepared.

Sadly The President's speech will eclipse #BachelorInParadise tonight. But ABC will be showing it later for those that get Trump'd

His warning didn’t seem to stop fans from using the interruption as an excuse to diss POTUS.

I'm sorry Trump, you did not receive a rose, please say your goodbyes and exit the White House immediately #BachelorInParadise

Let’s hope it was just the eclipse messing with the Paradise universe, and this never happens again.