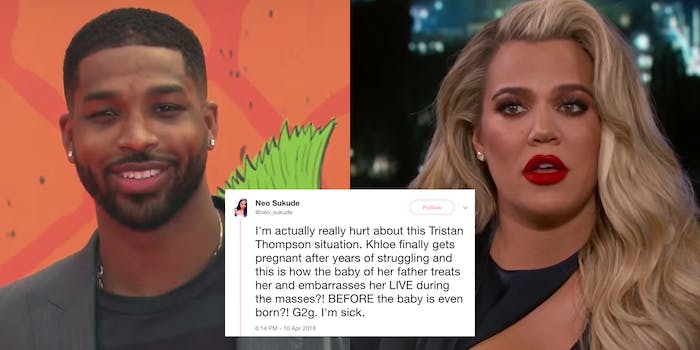 Tabloids reported Tuesday that Cleveland Cavaliers player Tristan Thompson was spotted being intimate with women who are not his girlfriend Khloe Kardashian—and Twitter couldn’t believe the news.

The NBA player was seen making out with a “mystery brunette” woman in New York last weekend,according to the Daily Mail. A follow-up from Hollywood Life reported that a source close to Kardashian, who is nine months pregnant and due any day now, “is devastated and has been brought to tears after seeing the pics of Tristan with another woman.”

I'm actually really hurt about this Tristan Thompson situation. Khloe finally gets pregnant after years of struggling and this is how the baby of her father treats her and embarrasses her LIVE during the masses?! BEFORE the baby is even born?! G2g. I'm sick.

Khloe Kardashian posted a pic of her and Tristan Thompson yesterday with the caption “We are ready whenever you are little mama” and the baby was like: Im’a wait until after tomorrow. There’s something about daddy you ain’t ready for yet. pic.twitter.com/sVgMk8vGg3

The way he's been playing maybe Tristan Thompson should do more of his cheating on the floor.

Tristan Thompson out here cheating on his pregnant women like he not averaging 2.3 rebounds and -7 point per game. Disgusting.

Plenty others pointed out that Thompson was also rumored to cheat on his ex-girlfriend Jordan Craig, who was still pregnant with her and Thompson’s child when he started dating Kardashian.

And still others, of course, had jokes.

After the Daily Mail story, TMZ released surveillance video of what appears to be Thompson kissing two women outside of Washington, D.C., back in October. At the time, Thompson was already dating Kardashian, who was three months pregnant.