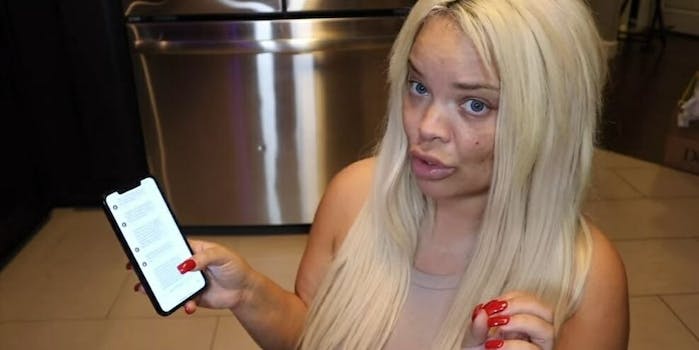 Trisha Paytas gets ripped by fellow YouTubers for ghosting, being fake

This has gotten nasty.

A trio of YouTubers are feuding, and Trisha Paytas is getting the brunt of the online criticism. In the past week, she’s been accused of failing to follow through on a collaboration with food YouTuber Nikocado Avocado, and earlier this month, YouTube star Ethan Klein called her out for manipulating her Instagram photos.

In her response, Paytas said the drama is silly.

“When you get hate online, it seems like the end of the world,” she said. “All the hate is being directed to you. … When people drum up drama about you … they want a response because they want that attention. This is so obviously stupid.”

The drama for Nikocado Avocado—who has 1.4 million subscribers—began in 2017 when he said he spent 100 hours creating a cover of a Paytas song called “Warrior.” That impressed her—she apparently said the video “blew my mind”—and she reached out to him to work on a collaboration. Avocado, who lives in Colombia, shared direct message conservations with Paytas (4.8 million subscribers) that they agreed to meet in Los Angeles.

When he arrived in California, he messaged her by writing, “I’m here in Hollywood, I brought you gifts lol I hope you get back to me! <3” Despite repeated messages from him to her, she never responded.

Although she had talked in a public forum about working with him, Paytas, in a subsequent video, disputed the claims that she was ever going to collaborate with Nikocado, saying “I don’t know where that came from.”

In a response video, she said getting ghosted by fellow YouTubers “kind of sucks.” Apparently, she’s not responded to other potential collaborators in the past and they’ve “just let it go.” She said she started feeling uncomfortable about their exchanges and started seeing “red flags.” He kept messaging her with no responses back, and she said she began to get scared of Nikocado.

In his video, Nikocado said that Paytas had faked screenshots between the two of them and made them public, and her fans responded by calling him a “desperate social climber.”

Earlier this month, Ethan Klein of the h3h3Productions YouTube channel called her out for manipulating her Instagram photos, saying she went from “beauty queen to WWF wrestler in 2 seconds.” He showed several examples of her photos, and he laughed about it the entire time. In all, his body-shaming commentary was disheartening at best and revolting at worst.

She responded on Twitter by writing, “You are a disgusting piece of shit. Your recent video is not only predatory—it’s also HARMFUL to young girls.”

She continued by tweeting, “I was suicidal at age 13, 15, 19, 22, and 25 over comments like yours. You went beyond opinions, you are going for extreme bullying that could lead to many girls wanting to take their lives like I did for so many years.”

He responded by writing off her concerns.

Who is this rude person? I don't recognize her from her profile picture. Anyone know? https://t.co/tI06H4qzMC

Either way, Paytas is obviously feeling the heat. She’s lost about 50,000 YouTube subscribers in the past week, and gossip vlogger Keemstar called her a liar. She responded in a tweet by declaring, “Let’s cancel me.”

In a video posted early Thursday morning, Paytas gave an interesting perspective on the drama surrounding her.