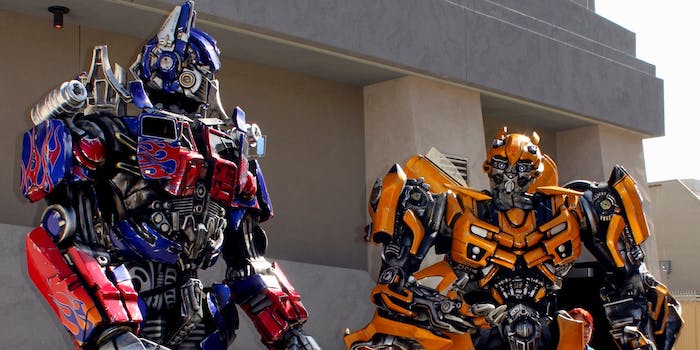 Nobody needs an expanded universe of 'Transformers' movies, but it's happening anyway.

As part of Hollywood’s ongoing effort to abolish originality, Paramount Pictures has announced plans for a “Marvel-style” Transformers franchise.

We’re currently up to four Transformers movies from the creative mind of Michael Bay, with a fifth due out in 2016. You might feel that this is already three or four more Transformers movies than anyone needs, but Paramount obviously disagrees. Like every other major studio, they are taking a leaf from the Marvel playbook and launching a multi-spinoff “expanded universe.”

Deadline reports that Paramount is negotiating with screenwriter Akiva Goldsman to work alongside Michael Bay, Steven Spielberg, and producer Lorenzo di Bonaventura to shape the creative direction of the franchise.

Goldsman won a screenwriting Oscar for A Beautiful Mind, but his work on movies like Batman Forever and The Da Vinci Code is more likely to be the goal for Transformers. It sounds like his role will be similar to that of Marvel Studios president Kevin Feige, who has creative control over the Marvel franchise but doesn’t actually write any of the movies. If the negotiation are successful, Goldsman’s job will be editorial, farming the bulk of the Transformers screenplays to a stable of lesser-known writers.

Despite the introduction of a new creative team, future Transformers movies will probably be very similar to the ones we’ve already seen. Transformers: Edge of Extinction may score a grim 18 percent on Rotten Tomatoes, but it grossed more than a billion dollars worldwide. If it ain’t broke, don’t try to fix it.