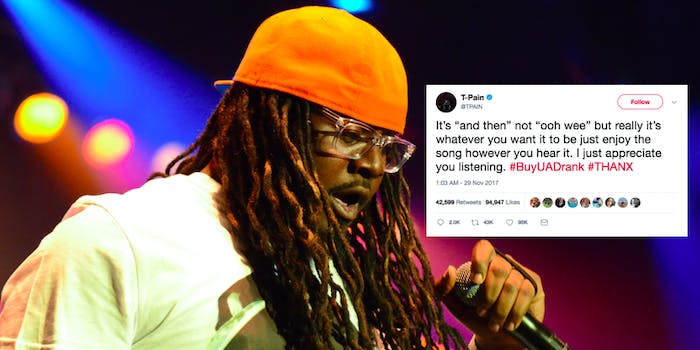 Your ears have deceived you.

Mishearing lyrics is a common problem that can easily be brushed off and corrected, but the internet still seems to be recovering from T-Pain’s #monumental announcements late Wednesday.

The R&B singer and rapper, still popular for his 2007 hit “Buy U a Drank,” felt compelled to take to Twitter and correct his fan base—nearly a decade later—on a specific line.

“It’s ‘and then’ not ‘ooh wee’ but really it’s whatever you want it to be just enjoy the song however you hear it. I just appreciate you listening. #BuyYouADrank #THANX,” he tweeted.

The world was turned upside down.

It don’t even sound right with that

I refuse to believe this. "And then" doesn't even rhyme with the following line, "I'mma take you home with me."

Even Jesse McCartney replied in shock, posting a 2008 video of himself performing the song which included the “ooh whee.”

Damn. I definitely thought it was “ooh wee” https://t.co/2YJkvajQbr

Not only was that nugget of information enough to make fans question every time they sang T-Pain aloud, but a follow-up tweet about the 2010 jam “All I Do is Win” sent many into an ultimate panic mode.

“I don’t want to throw another wrench in your childhood but also it’s ‘Everybody hands go UP……and they stay there….AND THEY SAY YEAH’ sorry #AlliDoIsWin I’m from #Tallahassee bro. That’s just how some of us talk,” the second tweet read.

YOU ARE LYING. YOU HAVE TWEETED A LIE. AND IM NOT EVEN IN THE MOOD RIGHT NOW.

Who hurt @TPAIN today? That’s what I want to know

I don’t even know who you are anymore

It goes harder the way I thought you said it. So it stays.

As to why T-Pain chose now to devastatingly correct his audience remains unclear, but the deed cannot be undone.