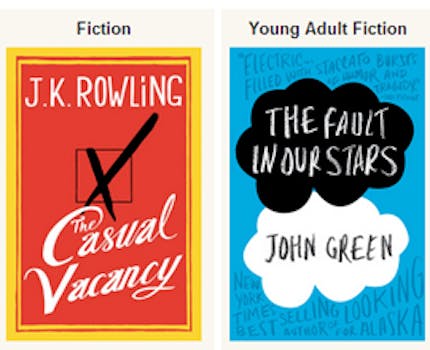 Can 1 million Goodreaders be wrong?

For the first time, Time and Goodreads both selected the same work as the book of the year, John Green’s The Fault in Our Stars.

It’s the end of the year, and the top 10 lists are starting to crop up. Yesterday gave us two milestones that reveal exactly how much the Internet is helping arbitrate popular tastes: Time’s Top 10 lists of the best fiction and nonfiction books of the year, and Goodreads’ 2012 Choice Awards.

With 1.15 million votes cast, however, the Goodreads list may be the one that determines just which books get the holiday boost.

The major surprise of Time’s list is that Young Adult (YA) novelist and Vlogbrother John Green’s The Fault in Our Stars—his critically acclaimed novel about two teens facing the reality of cancer, was voted the best book of the year—ahead of more literary, highbrow counterparts, such as Junot Diaz’s This is How You Lose Her.  The news came as a shock to Green himself, but it proved less so to the 37,000 Goodreaders who named it the top YA Fiction novel of the year.

With the mighty Nerdfighter fanbase for Green and his brother Hank boosting support for the novel, The Fault in Our Stars captured over 10,000 more votes than any other book in any other category—including J.K. Rowling, whose first novel since the Harry Potter series, Casual Vacancy, took the prize for fiction.

Coming as it does just a few months after the chair of the Booker Prize committee stated that book blogging is killing literary criticism, it’s interesting to note that the only overlaps between Time’s list and Goodreads’ are Green and Rowling.  Though other novelists on Time’s list, like Catherynne Valente, were on the shortlist of nominees, most of them only got a few hundred votes, dwarfed by far more recognizable competitors, many of whom spent much of 2012 on the bestsellers list

Could Goodreaders be the newest arbiters of taste for savvy readers? The site has come under fire before, both for the way authors and their fans sometimes gang up against negative reviews and for the pressure to leave primarily positive reviews. But with over 10 million members, Goodreads is also one of the quickest places to crowdsource “good” books.

Or, at least, Goodreads is the quickest way to dredge up the old argument about whether something is good simply because it’s popular.