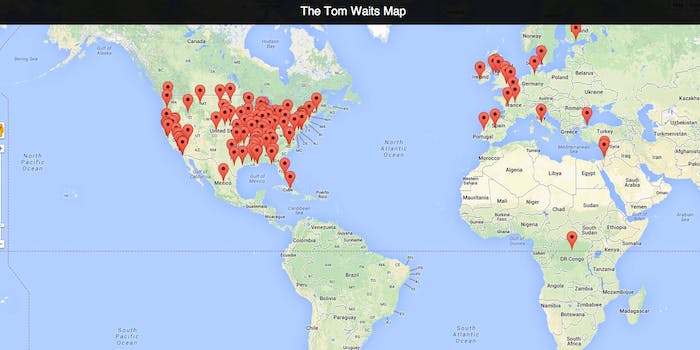 From the Ganges to "Putnam County," this map tracks every Tom Waits reference.

Tom Waits doesn’t just write songs. He tells stories—of vagrants, orphans, tramps, and brawlers—with scenes so vivid you can almost smell the stench of scotch and cigarettes in the room.

Now there’s an interactive map that pinpoints every place Waits has name-dropped in his six-decade-long career, from Maine to Malaysia. There’s a marker for Cuban jail (“Jockey Full of Bourbon”), the Ganges (“Lucinda”), and “Putnam County.” There’s even a pin in the middle of the ocean, a reference to “Starving in the Bell of a Whale” from 2002’s classic Blood Money.

The map is the work of an enterprising Swedish man named Jonas Nordström. The premise is simple: When you click on a location, the song lyrics referencing it pop up, in addition to the song name, the album it appears on, and the date it was released.

If this Tom Waits Map looks familiar, that may be because another more famous but equally raspy and cantakerous singer-songerwriter has already had his geographically far-flung lyrics mapped out in a similar way. Slate made a map of all of Bob Dylan’s references to place in honor of his 72nd birthday.

In fact, Nordström told me that’s where he got the idea. “I’m a member of a Tom Waits mailing list where someone suggested ‘we should do one with Tom.’ And I did,” he noted on Twitter. Nordström said he worked on the project over a few late nights about a month ago.

He doesn’t plan to do any more, but that’s a shame, because I’d love to see one for Leonard Cohen.