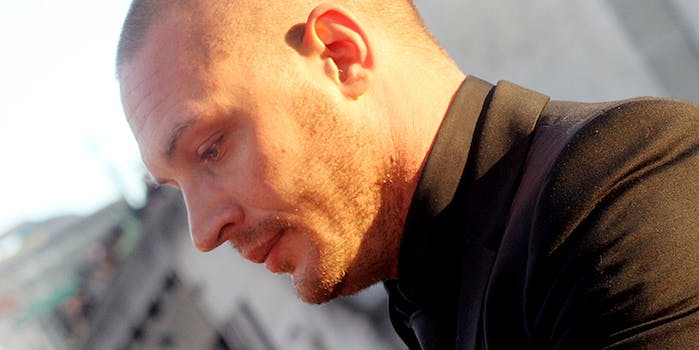 It’s a good time to be you, Tom Hardy. Critics think you’re the reincarnation of Marlon Brando. Spielberg really liked that mindblowing little magic trick you and writer Stephen Knight pulled off earlier this year. And next year, you’re starring in one of the most highly anticipated sequels of the decade.

But by the time Mad Max rolls around, you’ll have to stop vaccilating back and forth between your current dual roles of Hollywood A-lister and indie outsider. Eventually you’ll have to slip off the Bane mask and finally become a movie star.

Perhaps that’s why you’ve devoted so much of your final pre-Max year of freedom to low-key British masterpieces. You only showed up for season two of the BBC drama Peaky Blinders, which just arrived last month to Netflix but already has us clamoring for more. As always, you were mesmerizing.

Now, you’re bringing yet another BBC series to our greedy little hands. FX just snagged Taboo, a story set in 1813 about a man who uses 13 blood diamonds to build an empire en route to avenging his dead father. That sounds totally fucking crazy, like Wuthering Heights meets Road to Perditiion. We would expect no less from you, Tom.

We know you created Taboo with your own father, and we know your own father is awesome because he raised you to be the kind of person who simultaneously took stolen cars for joy rides in your youth and gave interviews about how much you loved shoes and hated the trappings of masculinity that Hollywood forced upon you.

We know your father is a writer, and we trust him because he had the good sense to name you after another writer, one as deeply attuned to human nature and as gloriously unhinged as you are. There’s a part in The Mayor of Casterbridge where a bull breaks free of its tether and runs rampant through the village, and, yes, that’s a metaphor for sex, but let’s just run with it. We imagine that like that bull you yearn to cast off your Hollywood fetters, the bothersome interviews, the shaving requirements, and the demand for normalcy. We picture you shadowboxing your way to freedom like you did in Warrior.

Would you be happy then, Tom Hardy? Would it make you feel less afraid of social media if you could somehow continue to be Tom Hardy, family guy, dog lover, streetwear designer, without also having to deal with the strain of being Tom Hardy, one of the greatest actors alive?

Sorry, Tom. We really want Taboo already. It’s not coming here until 2016, but seriously, it’s got Locke‘s Stephen Knight returning as writer, it’s produced by Ridley Scott, and it’s already garnering raves. It’s your own fault, Tom Hardy. You made us love you. You strolled up with your fake posh accent and incepted us, and then you made our OTP canon. It’s true, we all forgot to go see The Drop, but that was only because we were too busy watching you take the Ice Bucket challenge.

Just cut us some slack, Tom Hardy. We saw This Means War for you. You don’t get to tease us by promising us an awesome series about colonialism and revenge narratives and the East India Company and then holding it hostage until 2016. How dare you.

We want Taboo, and we want it yesterday.

You had better be filming 10 more seasons of Peaky Blinders to atone for this affront, Tom. Don’t give us those puppy dog eyes. You can sleep when you’re dead.