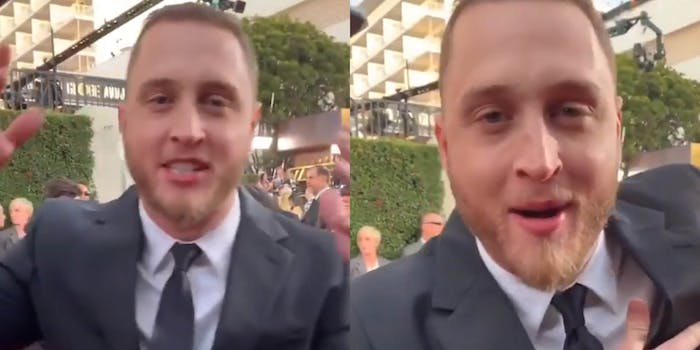 United States Of The Internet/YouTube

Chet Hanks is no stranger to his controversial use of Black slang.

Chet Hanks, son of actor Tom Hanks, made a cringe-worthy video on the Golden Globe red carpet Sunday night that has gone viral.

The 29-year-old who’s also known as rapper Chet Haze attended the Golden Globes in honor of his father who received a lifetime achievement award. On the red carpet, he took the time to record a video for his Instagram followers attempting to speak in Jamaican Patois.

“Big up the whole island massive, it’s your boy Chet coming straight from the Golden Globes,” the white rapper enthusiastically announced in a feigned Jamaican accent.

The video was eventually shared on Twitter by writer Brittny Pierre, and Twitter users expressed their astonishment that Chet would steal his father’s esteemed night and turn it into a viral circus.

“Thought i was leaving the vile circus of celebrity news in 2019 but then tom hanks’ failson chet hanks did an inexplicable patois impression on the night of his father’s lifetime achievement award,” wrote @generalslug.

Tom: “OK, Chet, you can come with us to the Globes as long as you behave yourself. This is an important night for—“

“Why does Chet Hanks continue to embarass (sic) his father like this? What did Tom Hanks do to deserve this messssss?! Whew chileeeeee,” she wrote.

Why does Chet Hanks continue to embarass his father like this?
What did Tom Hanks do to deserve this messssss?! Whew chileeeeee. https://t.co/PBrVWCULiF

Others joked about his transracial persona.

@angie_goodwood shared a photo of a white man wearing a white hoodie with the words ‘unapologetically black’ printed on it and captioned it: “Chet Hanks be like:”

Chet Hanks is no stranger to his controversial use of Black slang. In 2015, Chet Hanks came under fire for his unapologetic use of the n-word.

“Who is to say only Black people can use it?” Hanks reportedly asked. “The way I see it, it’s a word that unifies the culture of HIP-HOP across ALL RACES, which is actually kind of a beautiful thing. It’s a word that can be used out of camaraderie and love, not just exclusively for black people.”