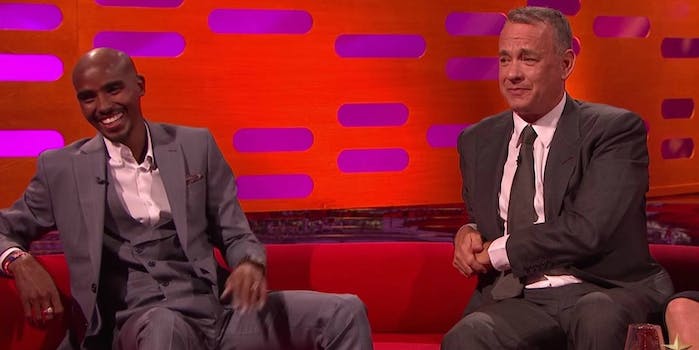 It's a beautiful sight to behold.

Forrest Gump was released in theaters 22 years ago, and still, Tom Hanks and his wife, Rita Wilson, can’t get enough of his ass.

During a recent visit to the Graham Norton Show, Hanks was asked about Forrest Gump’s running scenes. Considering Hanks was seated next to legendary British distance runner Mo Farah, a four-time Olympic gold medalist, this conversation made sense. But we assume Farah didn’t expect to have to hear about Hanks’s “firm as tin hams” ass.

It was, of course, a delightful conversation—which also included a discussion about Farah as a meme.

In case you need a reminder of what Hanks’s buttocks looked like as he ran away from the camera in 1994, here you go. It’s actually difficult to know exactly what scene they’re talking about, but here’s a good guess.

It’s hard to disagree with Hanks and Wilson in this case. That butt is a beautiful thing to behold. Almost as fantastic as Hanks doing Gump lines in 2016.