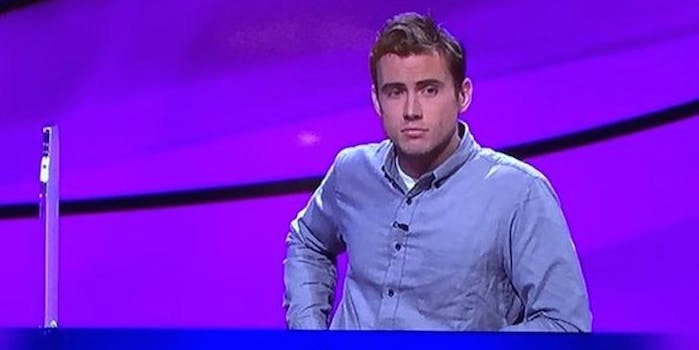 The Internet is collectively swooning over Tom from ‘Jeopardy!’

Last night’s episode of Jeopardy! featured a contestant so hot, the Internet couldn’t contain itself. Tom Flynn, a bartender from Goshen, New York, may not have wowed anyone with his score, but he took the win in sex appeal.

This contestant is probably the hottest Jeopardy player in many seasons. Who is Tom? #jeopardy

He faced off against Beth Horn, a nanny from Dallas, Texas, and Sean Anderson, a law professor from Champaign, Illinois, and even though they had him beat points-wise for most of the game, Tom managed to steal the spotlight on Twitter.

When you know where the last daily double is hiding. #tom #jeopardy pic.twitter.com/96JkxdU5Gf

The final nail in his heartthrob coffin came during Final Jeopardy when he didn’t have the correct answer. Instead of taking a guess, he went ahead and made himself into a living meme by simply writing “What” as his answer, and the Internet rejoiced.

Tom the bartender might be one of my favorite jeopardy contestants of all time. pic.twitter.com/HV925kuXlb

Tom, #what planet are you from? #Jeopardy pic.twitter.com/dZTakE4Ye7