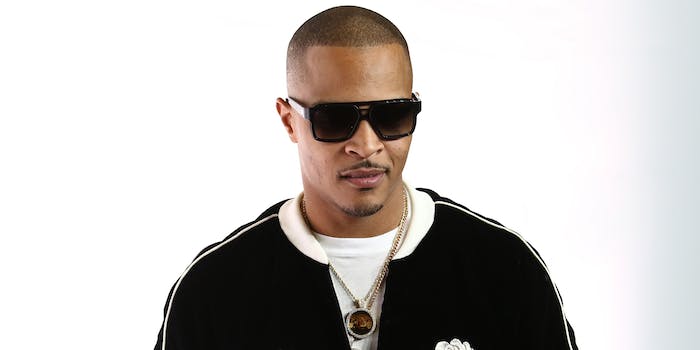 T.I. warns black celebrities about being ‘bamboozled’ by Trump

'Be aware, be alert, or be bamboozled.'

“There’s a strategic plan that people are trying to make you a part of,” he said. “Do not accept any invitation to have any meeting, no matter how positive you think the outcome may be.”

He told his audience he believes that no matter how positive the meeting may seem, they must be vigilant because people have hidden agendas. He specifically called out Kanye West, Steve Harvey, and athletes like Ray Lewis and Jim Brown—all of whom have taken meetings with Trump.

“There’s nothing wrong with sitting down across from anybody, no matter how different your views are from theirs or how different your backgrounds may be,” he said in the final video. “As long as they give you the basic human decency of respecting your values, respecting your ancestor’s legacies and then not represent hate groups that are adamantly against your advancement or progression as a people. With that being said—Kanye what the fuck you doing?”

Attn.!!!! Be clear…. There IS an agenda behind all these meetings. I shall explain in detail. Be aware. Be alert. Or
Be Bamboozled!!!! pic.twitter.com/rzP1tZj58m

Ok so this how it all breaks down guys…. Be aware Be alert or Be bamboozled. #USorELSE pt.2 pic.twitter.com/WDibYPZqF2

Given what's goin on between him & Congressman Lewis…. All y'all looking CRAZY right now!!!! Be Aware, Be Alert, Or Be Bamboozled Pt.3 pic.twitter.com/o7kHsBPxvX

After his videos to celebrities, T.I. also tweeted a video serving as an open letter to Trump. In the video, T.I. says he feels compelled to tell Trump what oppressed minorities want him to know about them.

“Should it ever seem at times like we are against you, I assure it is a result of you defining yourself as the representative of those who are and who always have been against us,” he said. “The deck has always been stacked against us in this country. With every generation there has been strategic steps to oppress, imprison, and control us.”

T.I. also tweeted about Malcolm X and told his followers to “be aware, be alert, or be bamboozled.”

Sound familiar? Malcolm knew it then…. Be Aware, Be Alert, or Be Bamboozled. #USorELSE #LetterToTheSystem pic.twitter.com/ccHsvxwwUj

Twitter users responded to T.I.’s tweets both positively and negatively.

.@Tip @ShaunKing I think T.I. speaks for us all when he says, "Kanye, WTF". Awesome.

Let's link man. Form an alliance and build. Just putting it out there. It's bigger than Hip Hop. #salutetoarealone #justice

T.I. originally began speaking out against Trump on Jan. 14 with an open letter in Rolling Stone magazine.

“As we continue to go on together as a nation, I apologize in advance for the friction and hostility that inevitably comes with us feeling years of pain, neglect, resentment and not being heard,” he wrote. “I am hopeful that we will not go and repeat the mistakes of the past. I am hopeful that we will all work to right our wrongs and become better men and women and a better nation.”